30 Years Ago: A “Leather Jacket” Youth’s Past in Chongqing – Part 3

From “Rhodan” to “Rulai Buddha”: A Sculptor’s story by Jiao Xingtao, Part 3

Following this poem, the whole class was suspended in order to build the “Pilgrimage to the West Palace”, the most popular theme park with sound, lighting & electricity in the 1990s. A selected area used a variety of means to build a package-themed scenic spot where lights are swaying, the entrance is flickering, the characters seem to be moving, tourists are coming to watch, buying tickets, and then shopping, having happily paid an expensive price to enter. 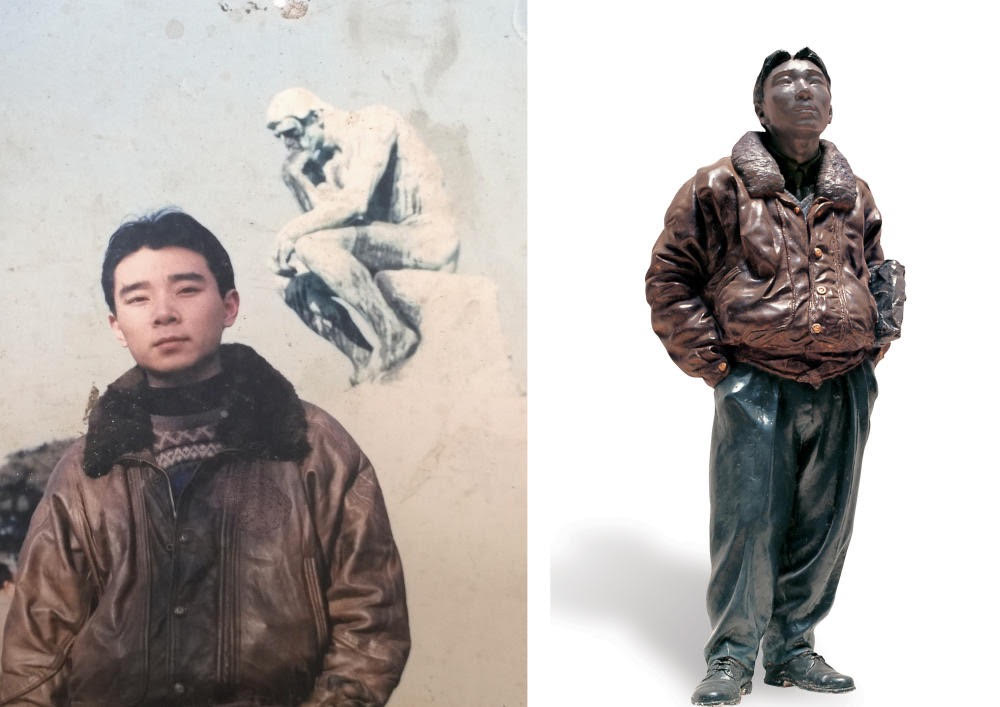 Because the landscapes of such scenic parks are all artificially recreated, sculptures are often important. This brought us, as sculptors, a lot of opportunities and money. In those few years, the most ambitious sculptors, carrying their sculpture knives, went south and north, climbed up and down, and took advantage of the good opportunities to work. The Head of Department teacher paid tribute to us, and everyone was happy. The older generations used to say: “Women are afraid to marry the wrong man; the man is afraid of getting into the wrong career.” The career part of that statement was true for me. Sculpture had become very popular, and we had finally hit the jackpot in terms of career opportunities. When the course of urban sculpture changed from “city sculpture” to “food sculpture”, the clothing of the sculpture department also changed from junk suits to leather jackets. 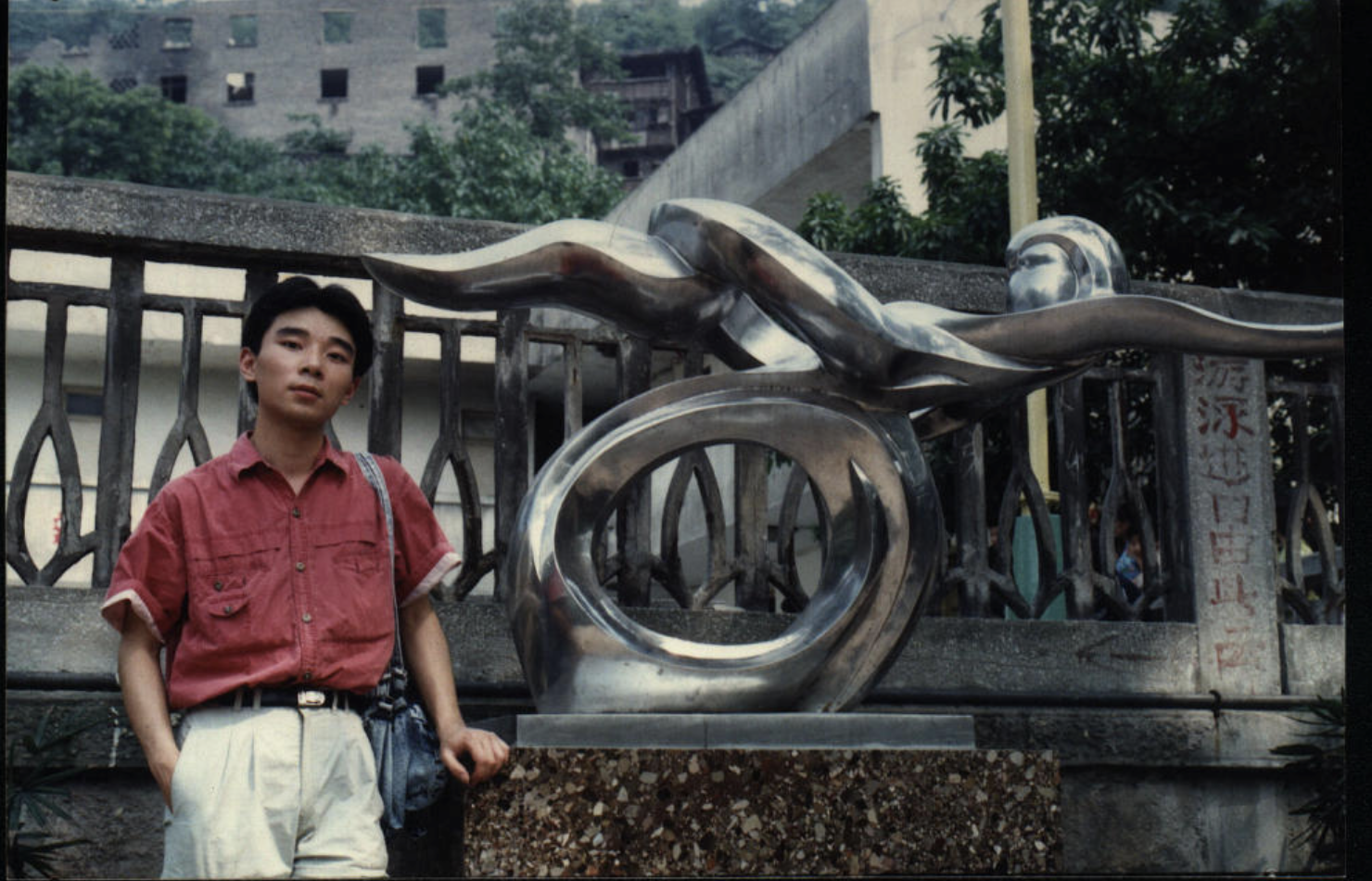 Photo: The first “urban sculpture” of the third grade of Jiao Xingtao University, 1990

In my second year at the Academy of Fine Arts in Hangzhou, Sun Zhenhua and Zeng Chenggang made the first invitation exhibition for young sculptors in China. In those few years, the sculptures of the Zhejiang Academy of Fine Arts were very strong, and they won many awards in various exhibitions across the country. This was the first unofficial academic exhibition and group of seminars in the sculpture industry.

Four teachers from Sichuan Academy of Fine Art participated. Upon returning, they were very excited. I remember that evening; we were asked to sit on the outdoor platform on the first floor of the teacher’s building. Those teachers were dashing through their speeches, their body language showing their excitement; their faces were like gold powder, half-bright and half-dark against the sunset. For a while, it didn’t feel like a sculpture conference, more like a scene from a martial arts competition. Finally, everyone was in agreement that we would endeavour to start a revolution for Chinese sculpture over the next 10 years.

The most impressive outcome of this exhibition was the emergence of a group of super realistic style sculptures, such as “Guan Yuan Spring Snow” and “Standing People”. There were really cool! The sweeping of the classical and the so-called “themes” and “meanings” accumulated in the sculptures. Although the problems with Chinese contemporary art and the state of sculpture were still misplaced, changes had begun.

30 Years Ago: A “Leather Jacket” Youth’s Past in Chongqing – Part 2

From “Rhodan” to “Rulai Buddha”: A Sculptor’s story by Jiao Xingtao, Part 2

“This was the season of love; there was love in the air…”

I rented a house, which was located up in the mountains. I didn’t have a girlfriend then, so I spent lots of time studying various pieces of art anatomy and reading master sculptors’ catalogues to pass this energetic but boring period of my life. I still remember one afternoon when I didn’t have class. I woke up from a nap and stared at the sunny wall outside the window. There were a few books scattered on the floor, including New Concept English and Herbert Reed’s Modern Sculpture History. Because I didn’t know what to do after I woke up, I’d been lying there until dark. At that moment, I felt that the days were long and distracting. Graduation was like a station that was thousands of kilometres away, and I had to get there barefoot.

That year, Rodin’s exhibition was shown for the first time at the National Art Museum of China. Several classmates bought a few standing tickets and squeezed on the train. After two days and two nights, we arrived in Beijing. We didn’t eat, just went straight to the museum and spent a whole day looking at those sculptures like pilgrims. Now, in addition to the bronze statues with the black skulls whose pupils are deep and bottomless, the biggest surprise was to meet the movie star Lu Liping. He was looking up and down the front of the sculpture with a thoughtful expression, eyes slightly open. But still beautiful. 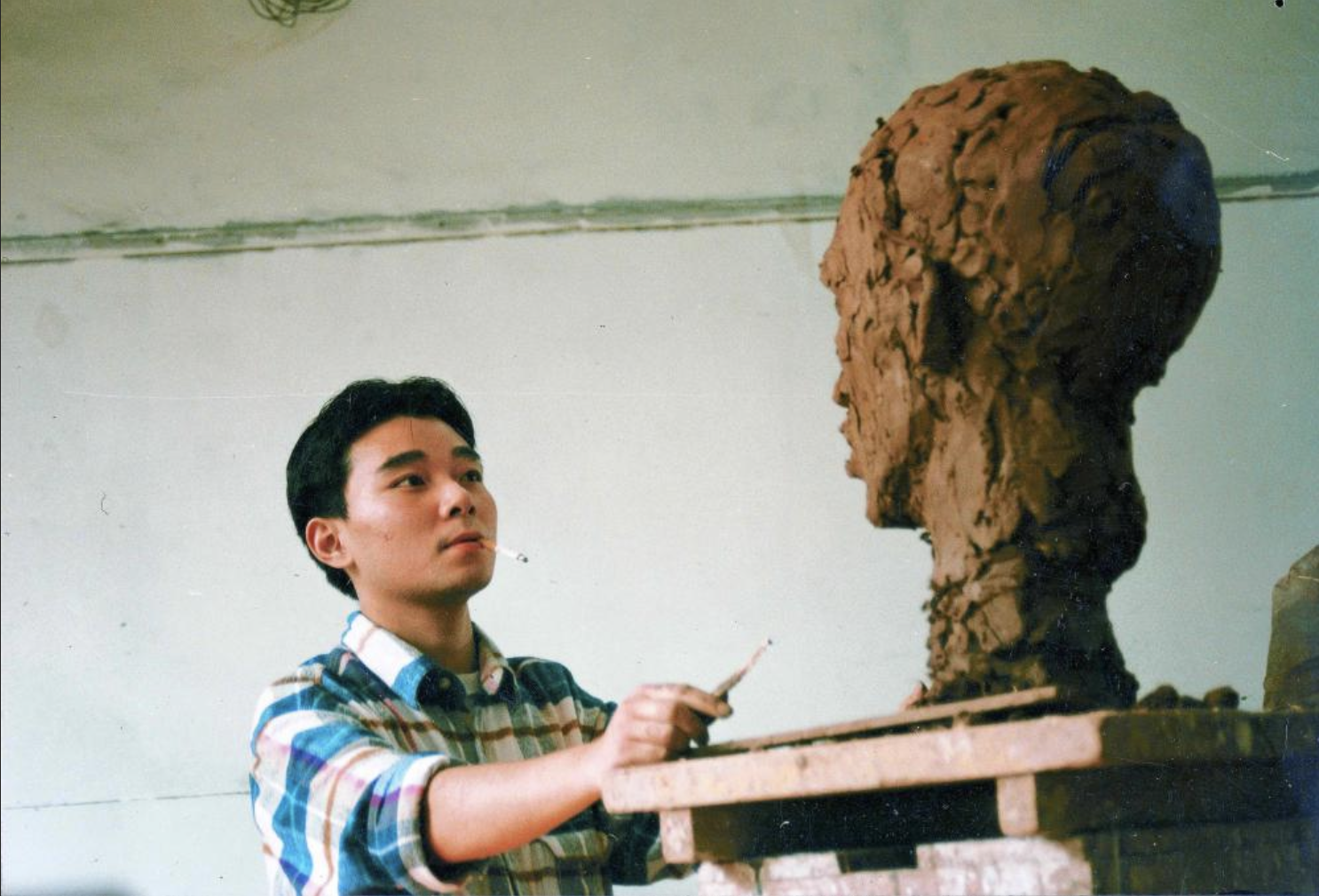 Another strong memory, apart from seeing Lu Liping, was being hungry. We had not eaten for a day, and we had to resist strongly not to have any of the street snacks. Instead, we were determined to go to Wangfujing Street to eat a burger and chips from the first McDonald’s to open in China. On that night, our dream fulfilled, we lay in bed contented in a basement and took out the seasoning bags with English writing all over them that we had snuck back from KFC. While reflecting, it came to mind that Rodin’s sculptures seemed to be different from ours. There were no block faces, but many details. However, a master’s works must be good sculptures. Were we doing it wrong? We tore open the seasoning bags and a substance flowed out like blood and, tasted with a tongue, it was sweet! It turned out to be ketchup! We were as happy as if we had won some money. In the early spring of March, we took off all our clothes because we could not stand the heat in the North. If I would come to Beijing again in this life, I vowed I must live in a room with windows. One of the classmates muttered thoughtfully, “Why do our sculptures have to be square?” Now, twenty years later, the person who questioned this is the vice president of an art school in Chengdu.