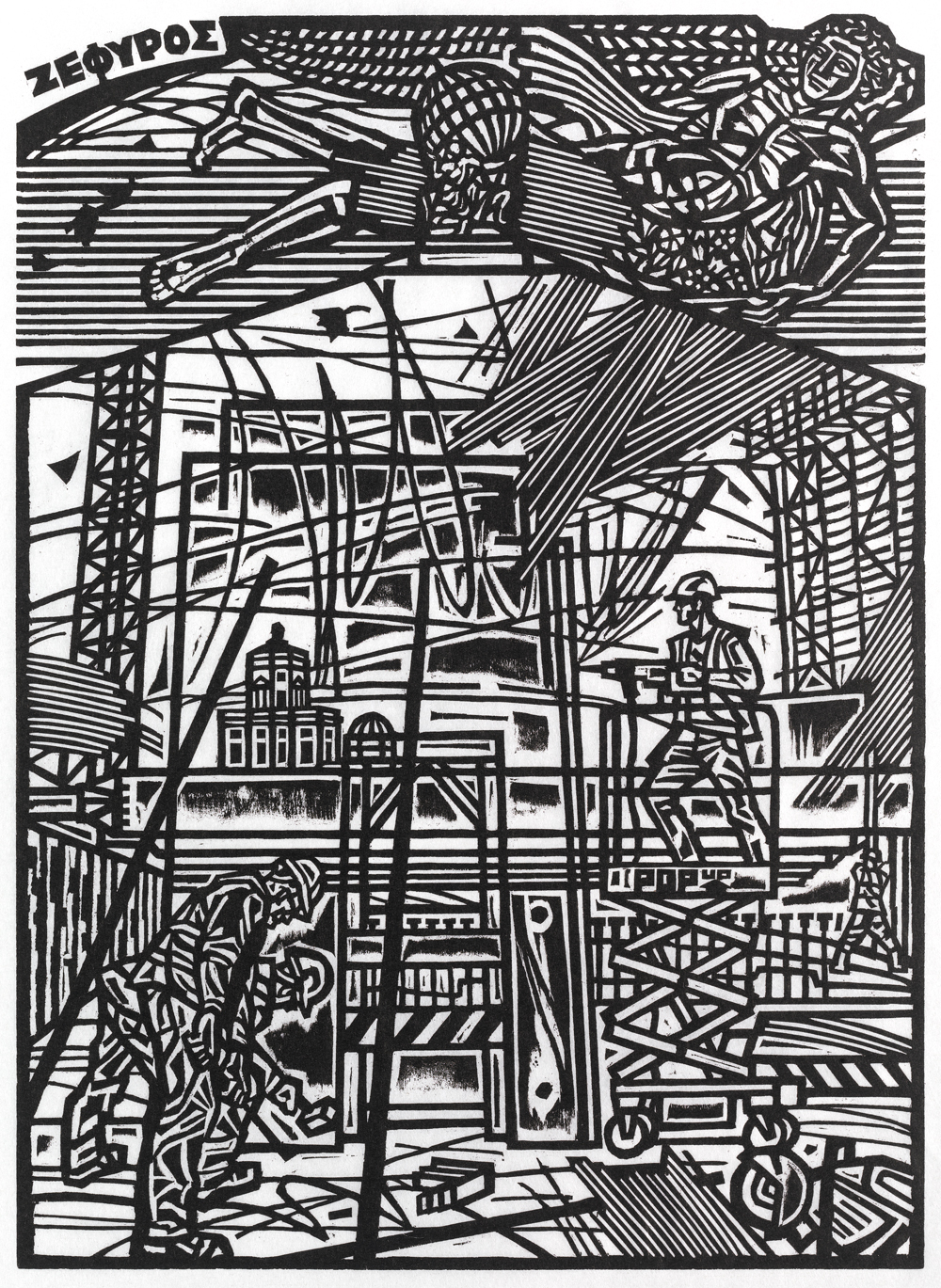 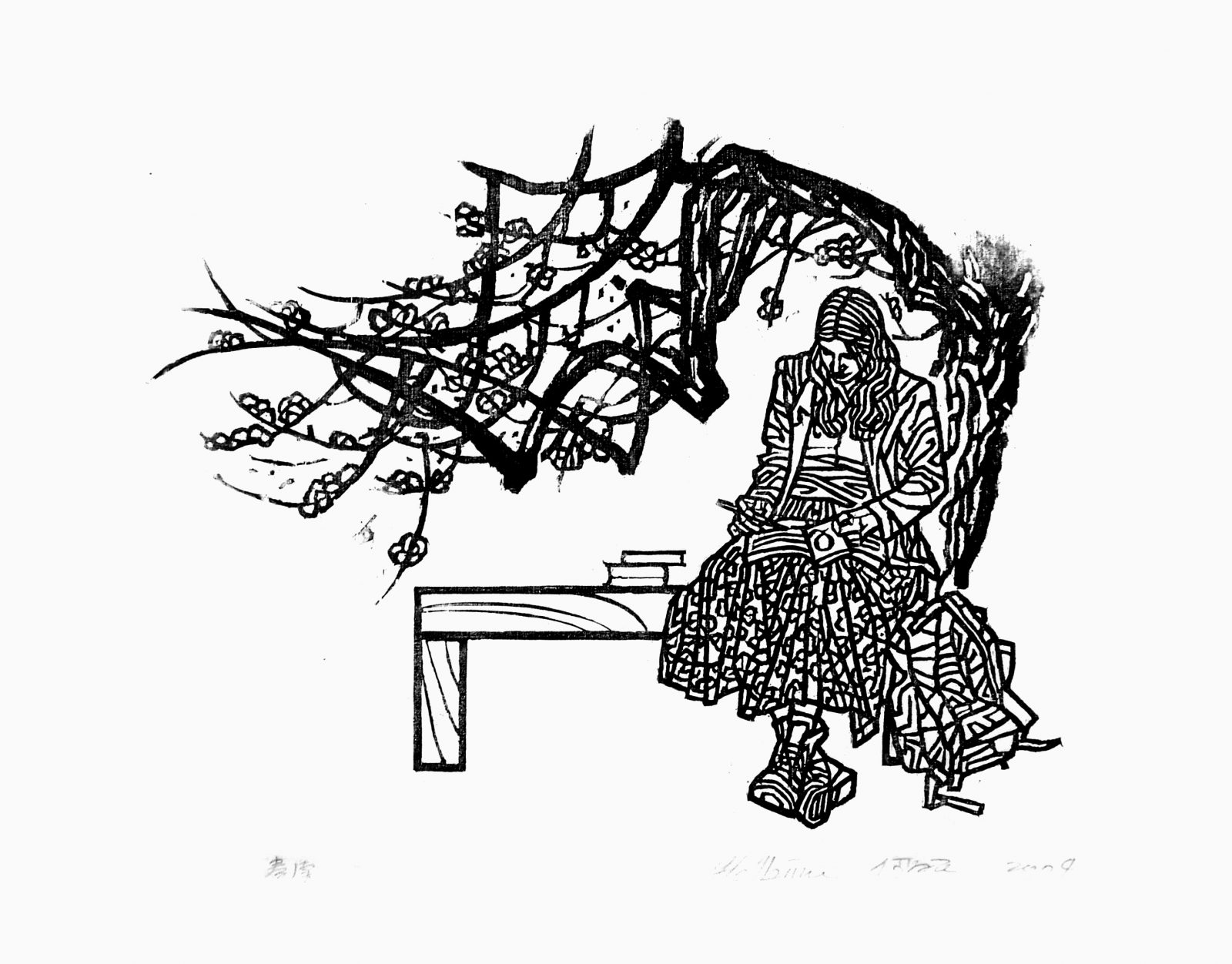 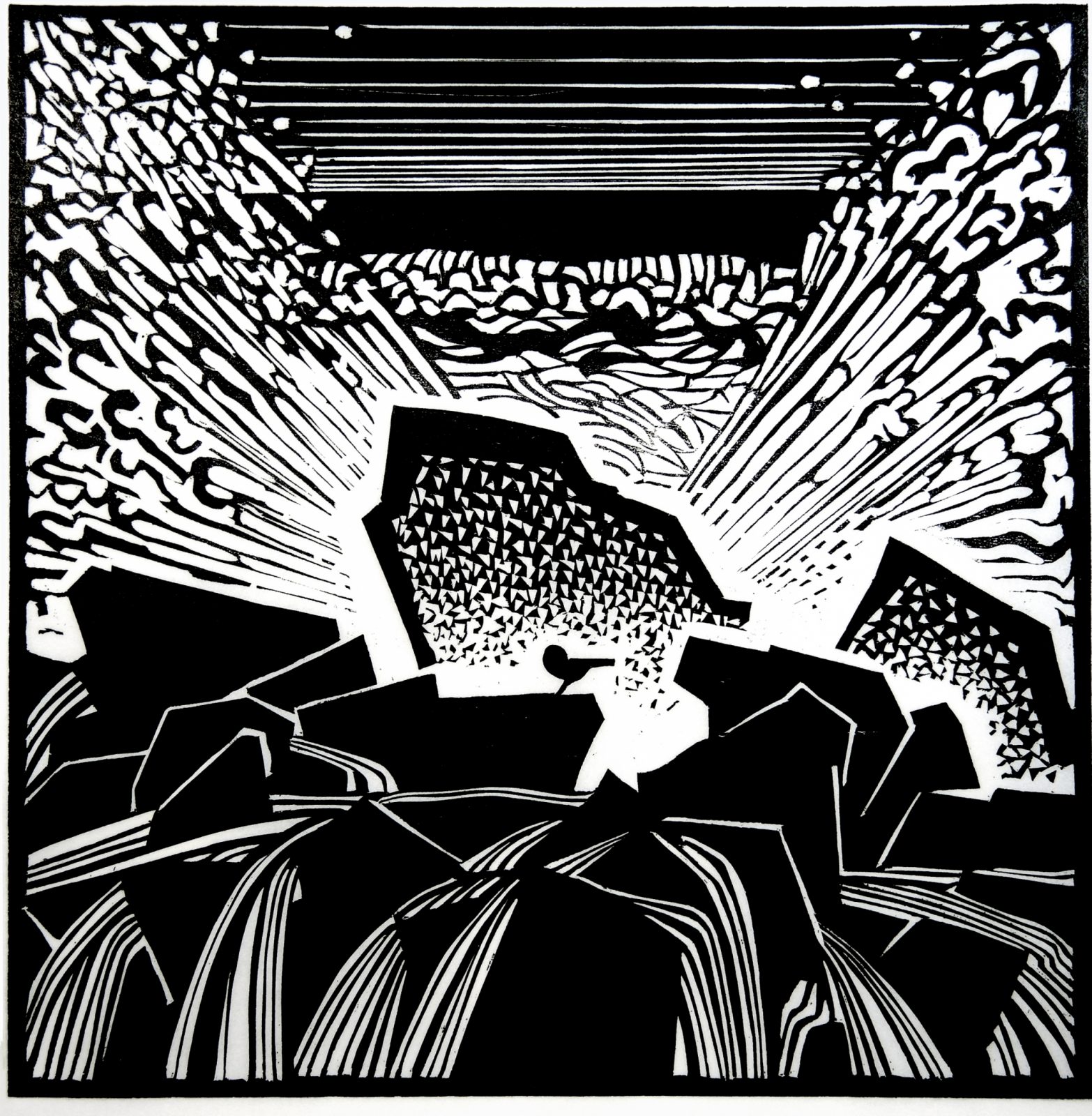 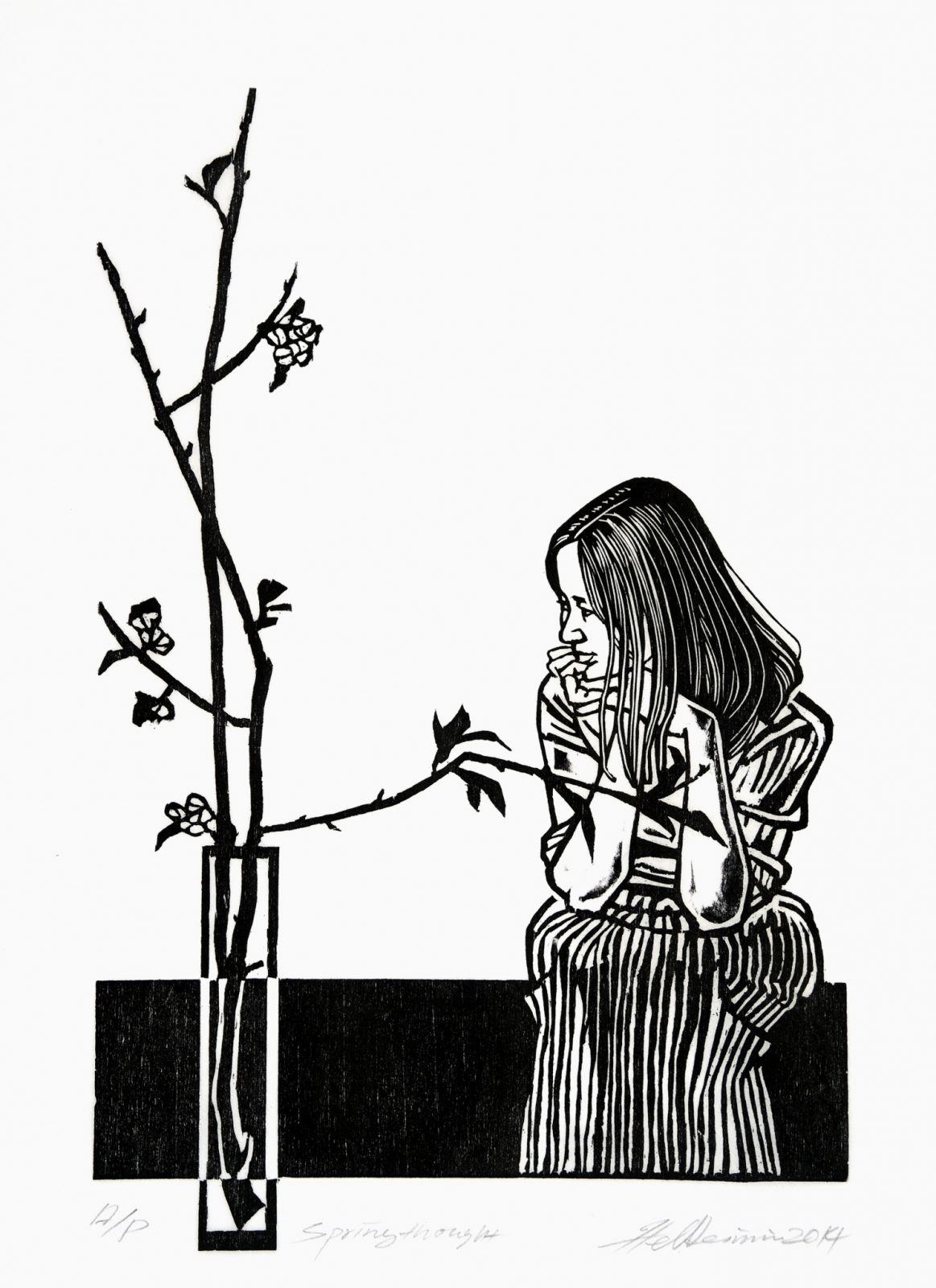 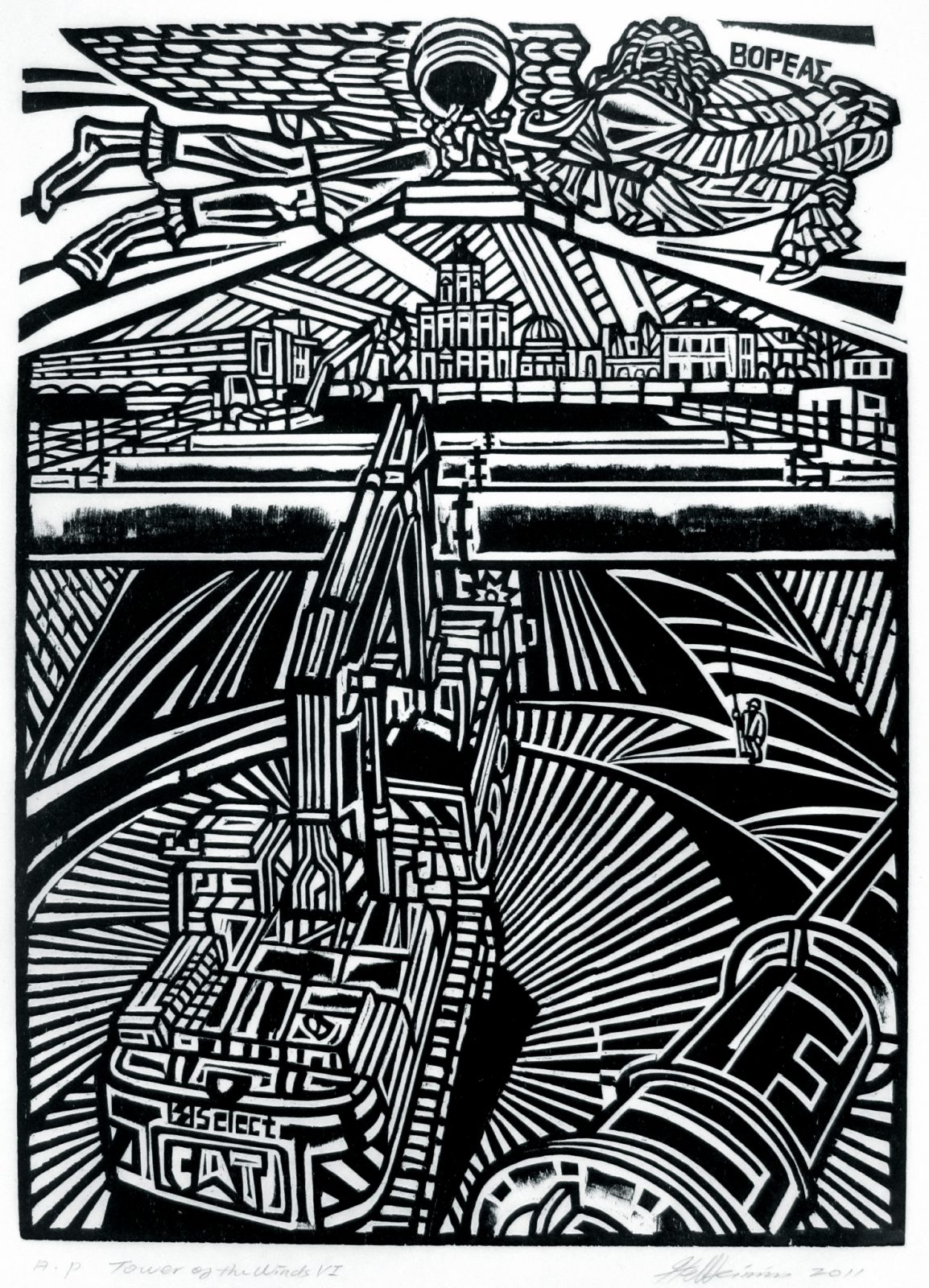 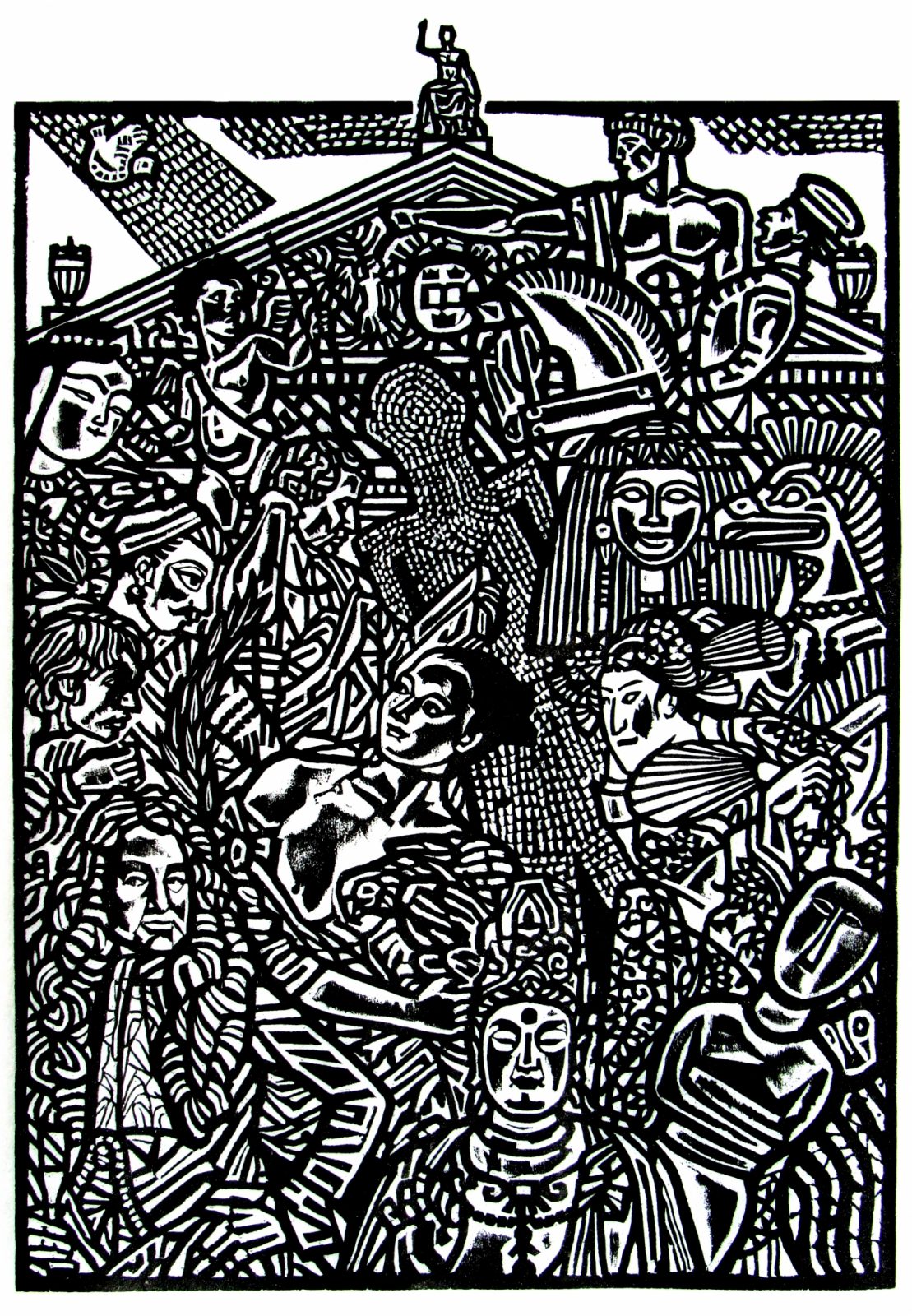 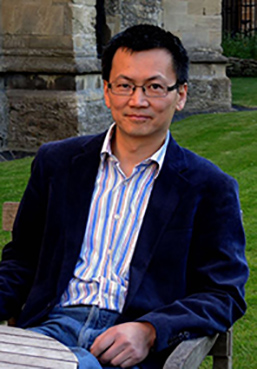 Within the traditions of the Song and the Ming dynasties, He Weimin is the scholar – artist. Scholarly control of the writing brush is calligraphy, where the visual expression of a word aims to complement its meaning and from the art of calligraphy emerged the twin arts of painting and drawing.!

Printmaking in the broadest sense soon followed, distilled into the woodcut printed with that same water-soluble black ink used for calligraphy and painting, eschewing its reproductive purpose and becoming an expressive medium under the patronage of the writer Lu Xun in the 1930s.!

He Weimin’s irrepressible creative energy encompasses all these aspects of the graphic arts.!

Weimin first studied printmaking at the Lu Xun Academy in Shenyang, north-eastern China. A period of professional practice was followed by four years of study at the University of Ulster leading to the award of a doctoral degree in 2005, his thesis being, in essence, a philosophical understanding of the nature of the woodcut.!

Weimin moved to Oxford in the same year to take up the post of Christensen Fellow in Chinese Painting at the Ashmolean Museum where he collaborated with the Keeper of Chinese Art in curating the exhibition Chinese Prints 1950-2006 held in Oxford in 2007.!

Thanks to his enthusiasm and that of his colleagues, a modest budget and Weimin’s personal contacts with the artists, the Museum was able to retain the exhibited prints that chart the diversity of creative output during the fifty-six year period.!

With the end of the Fellowship, Weimin was appointed to record the partial demolition and rebuilding of the Ashmolean Museum in ink drawings and woodcut prints. The many drawings of the museum staff, the building site and the building workers that emerged formed the first exhibition to be held in the new building and were published as the pictorial book ‘Building the New Ashmolean‘, a copy of which was presented to HM The Queen who officially re-opened the Museum in 2010.!

The quality and incisive nature of the drawings impressed all who saw them and confirmed Weimin’s suitability for his current post as artist in residence within the University of Oxford’s Estates Directorate. This new post requires him to record the re-development of the site of the Radcliffe Infirmary that on completion will become the Radcliffe Observatory Quarter. A ‘work in progress ‘ exhibition of the drawings and prints completed so far were shown recently in a temporary gallery on the site and examples from the exhibition were published in the Oxfordshire magazine in April.!

In recognition of the quality of his work and his contribution to printmaking, Weimin was elected an Associate of the Royal Society of Painter-Printmakers in 2012.