In July 2019, ArtChina artist Chen Qi left his Huan Tie studio after 10 years of working and moved into a new studio located in the Winery International Park Beijing. During the move, a roll of unused paper from a decade ago indicated his artistic practise in paper-based media creation. It represents the past, the present, and the future.

Chen Qi said: “Life is in the process of growing and changing. So a farewell to the past is not a dead end. Instead, it is a newborn.”

This roll of paper triggered the idea which turned into an exhibition titled “Renewal and Coexistence: Chen Qi 2019”, which commenced at the Amy Li Gallery on 30 November 2019. Two exhibiting spaces in the gallery are occupied by the artist’s new ink paintings, woodblock prints and paper sculpture. Particularly, a 1:1 reproduction of “A place without whence or whiter” is exhibited for the first time in Beijing after it became the most popular artwork in the China Pavilion of the 58th Venice Biennale, 2019. 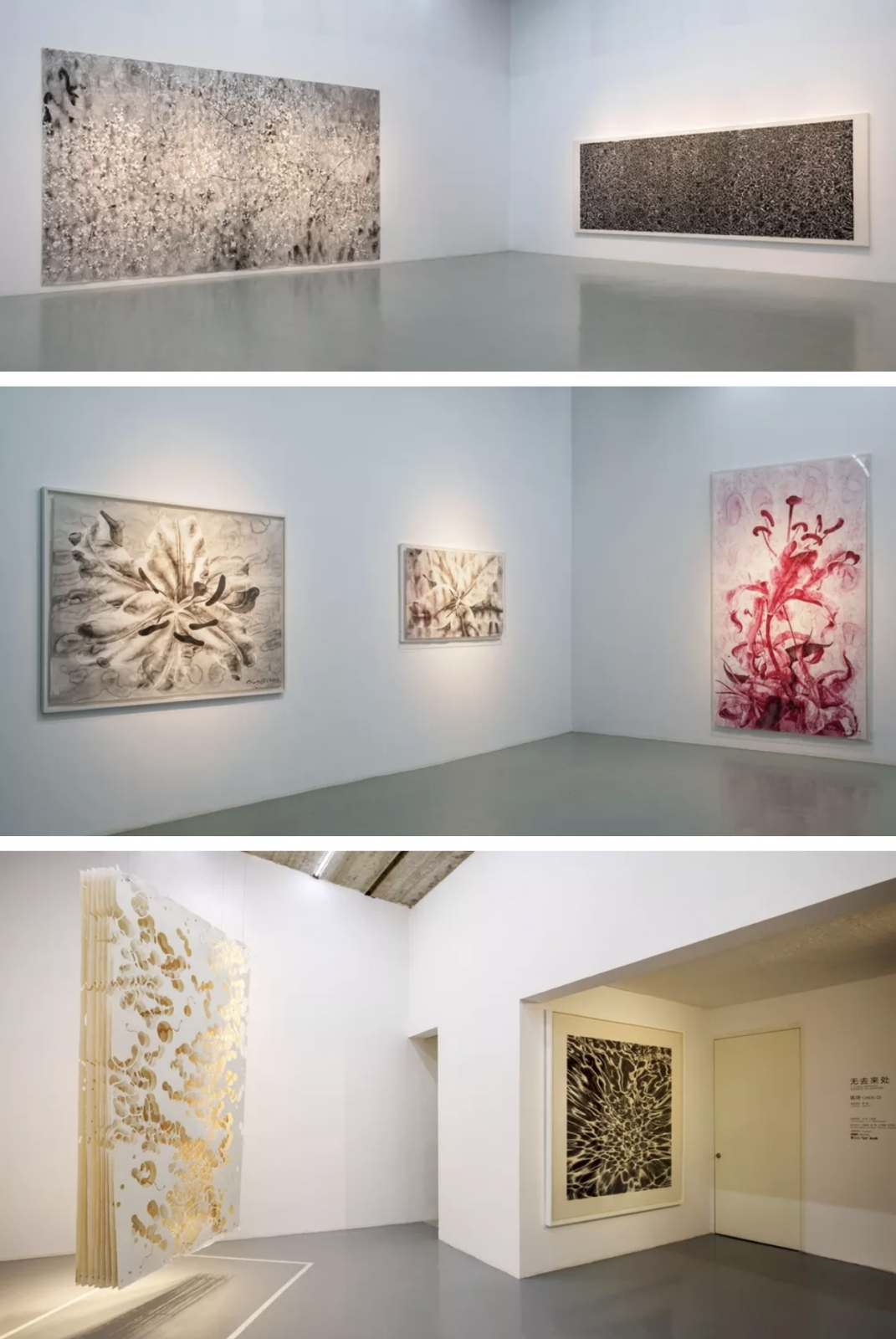 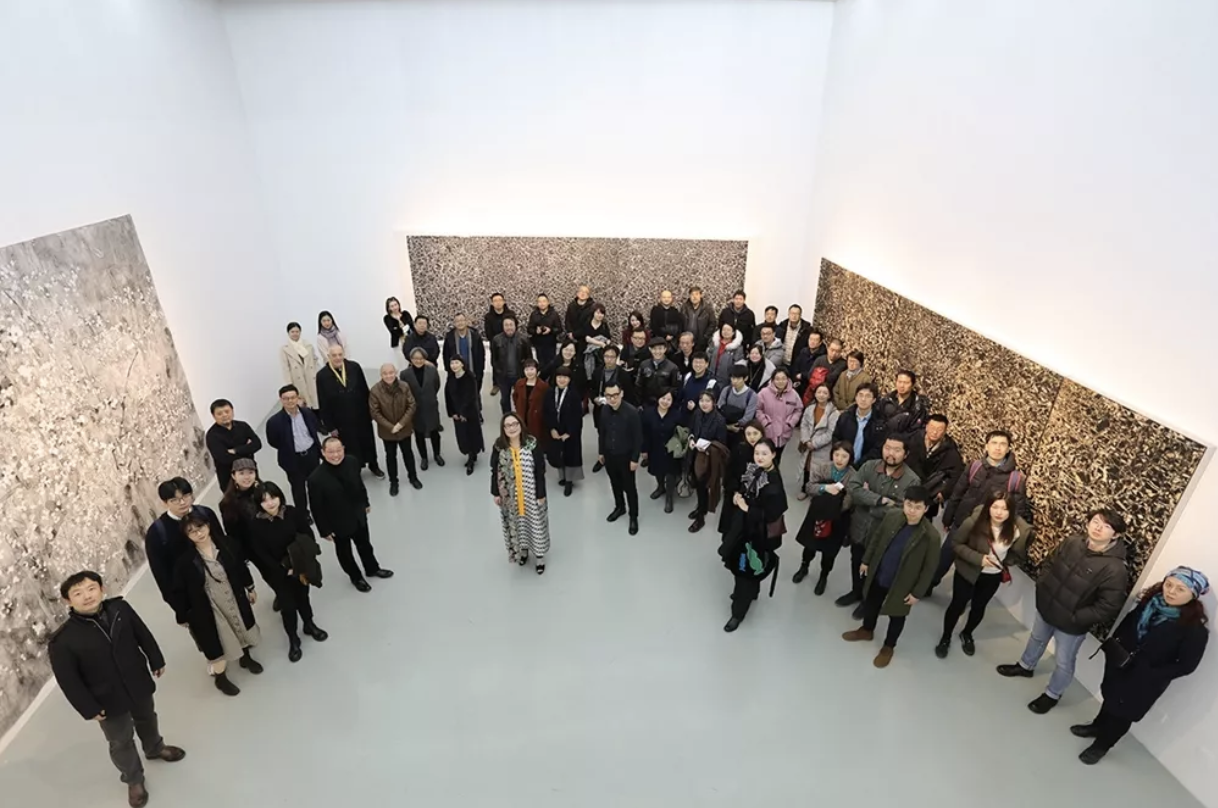 The exhibition is divided into two units, namely, “Renewal” and “Coexistence”, which respectively present Chen Qi on two dimensions. One showcases Chen Qi’s sensitivity to time travel, while the other illuminates his ability in terms of interpreting space. By bringing together two dimensions of the artist’s work, the exhibition enables Chen Qi’s complete world view and artist view to be composed. The farewell to the past does not stop Chen Qi’s extension of his previous art context. In Chen Qi’s current practise, his artistic expression and language based on printmaking as well as his insight into the notion of time are continuously being developed and he keeps absorbing new inspiration for his innovations.

In the process of his printmaking practise and research over many years, Chen Qi’s consideration regarding the history and the essential attributes of prints can be reflected in the two viewpoints he put forward in 2018 —“purposeful imprints” and “non-mechanical plural”. The alleged “purposeful imprints” refer to the function of printmaking at present which has long been different from the image reproduction and dissemination of the past. When cameras and digital images have replaced obligations in printing and reproduction, what is the unique identity that makes printmaking irreplaceable? In Chen Qi’s point of view, prints need to keep a clear distance from painting. When printmaking no longer serves as a bridge for image copying, each printing plate is hidden behind the image and every imprint on it is unique.Those purposeful imprints contain rich information of the creator’s psychology, behaviours and emotions as a whole. By being concerned with printing plates and imprints, Chen Qi actually deconstructs the function of printmaking in history, and he attempts to reconstruct its uniqueness as an independent art category in the contemporary art field. The notion of “non-mechanical plural” emphasises the differences and changes that each plate should present in the specific practise of contemporary printmaking. By jumping out of the restrictions of the one plate that corresponds to one image, the simplex “plurality” of printmaking can be broken.

In the unit of “Renewal”, the woodblock printing “Origin of Essence” is displayed together with its woodblock plate, which shows Chen Qi’s continuous exploration of these two concepts. Chen Qi introduced this piece of work in the interview with CAFA ART INFO. He mentioned that the whole picture is composed of two types of images: one is the ripple of water which runs through the context of his art creation; the other is the Arabic geometric patterns. In the Arabic culture, patterns do not serve beauty and decoration, but they explain the world by visualising mathematical reasoning in the form of graphic vision. Through the superposition of these two types of images, Chen Qi would like to express the logic and “rationality” behind everything. In this print, the arranging graphics support the logic and rationality of the dynamic water waves. The mutual switching between these two kinds of images provides viewers with a fantastic visual experience.

Image: View of “Origin of essence”

From the recent work “Puncture the Ice Lack” showcased in the exhibition “Chen Qi —Experimenting With Curation and Comprehension” in Deji Art Museum (Nanjing) earlier this year, Chen Qi continuously attempts the technique of “reduction woodblock print”(减版), which makes his works full of uncertainty. There are five chapters in the work “Origin of Essence” series, and each of them is a monoprint. These five editions are different but interdependent with each other, realising Chen Qi’s deconstruction of prints’ pluralism. During the process of creation, some editions finished with Chen Qi’s perception and control of their particular degree of completion. On this basis, the printing plate was continuously enriched, and the new pictures were able to be gradually produced. Each imprint on this developing woodblock plate demonstrated a choice and an emotion of the creator. In this case, the juxtaposition of the five editions seems to reveal our cognitive process of knowing a matter. It starts with disorder and non-induction but will eventually approach logic and rationality.

Lily is a new theme in Chen Qi’s artwork, and painting with ink as a medium is also a new artistic language for him.

The story takes place on a roll of paper that appeared during the move of Chen Qi’s studio. What this old paper brings to Chen Qi is a sense of warmth without any desiccation. It is gradually polished to a unique texture over time. Chen Qi painted various forms of lilies with ink on this roll of paper. He mentioned that although the medium of ink requires the creator to paint quickly, he still draws in his own slow pace. He recalled that each time he drew a layer; he then waited for it to dry before he painted the second layer. He created the ink paintings layer by layer. He is obsessed with the blooming feeling and the visual effect of the edges from water stains. He still creates ink paintings within the framework of prints, superimposing layers of colour. However, under the influence of water, the ink and colours depict a sort of emotional splash and integration. 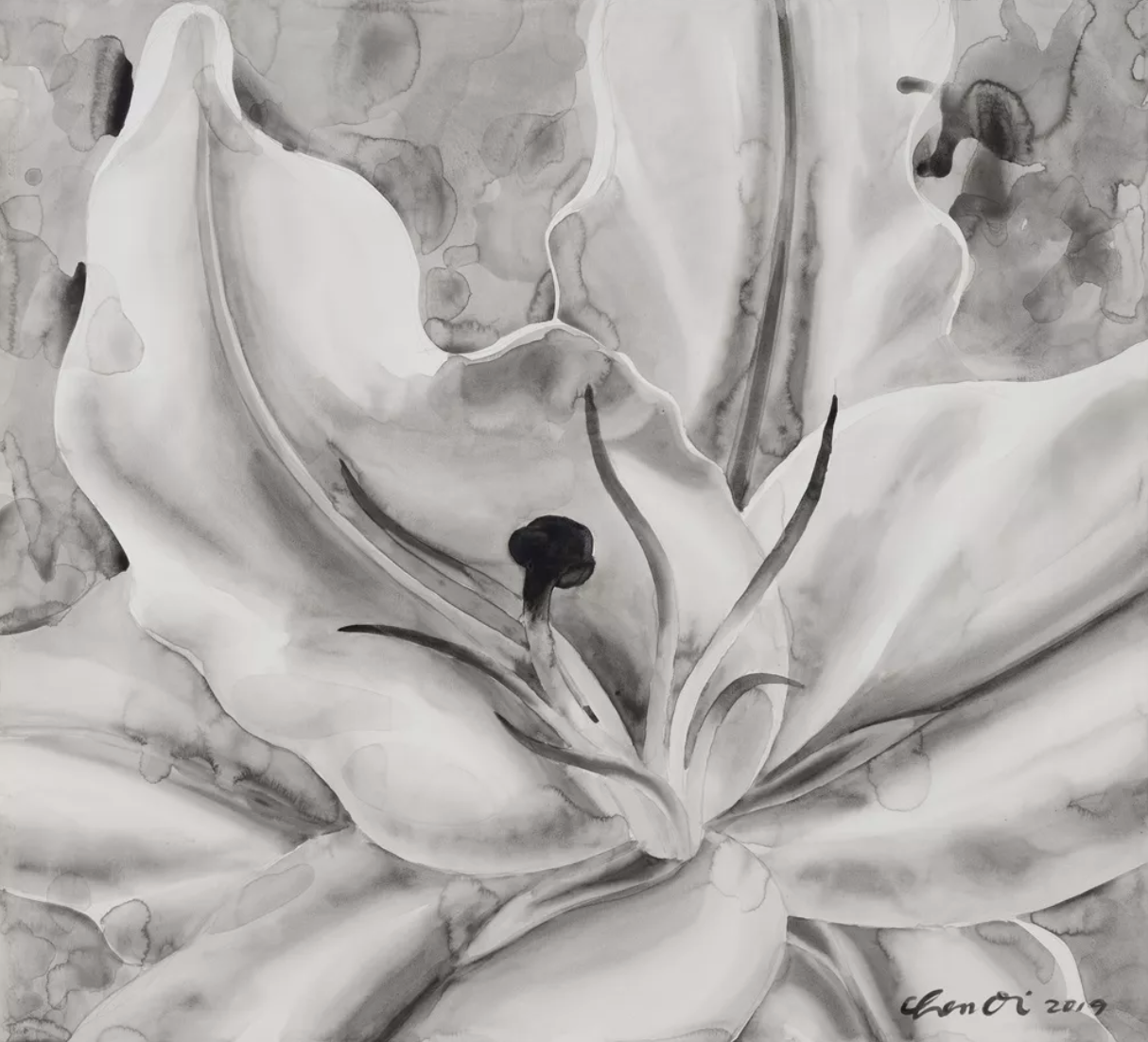 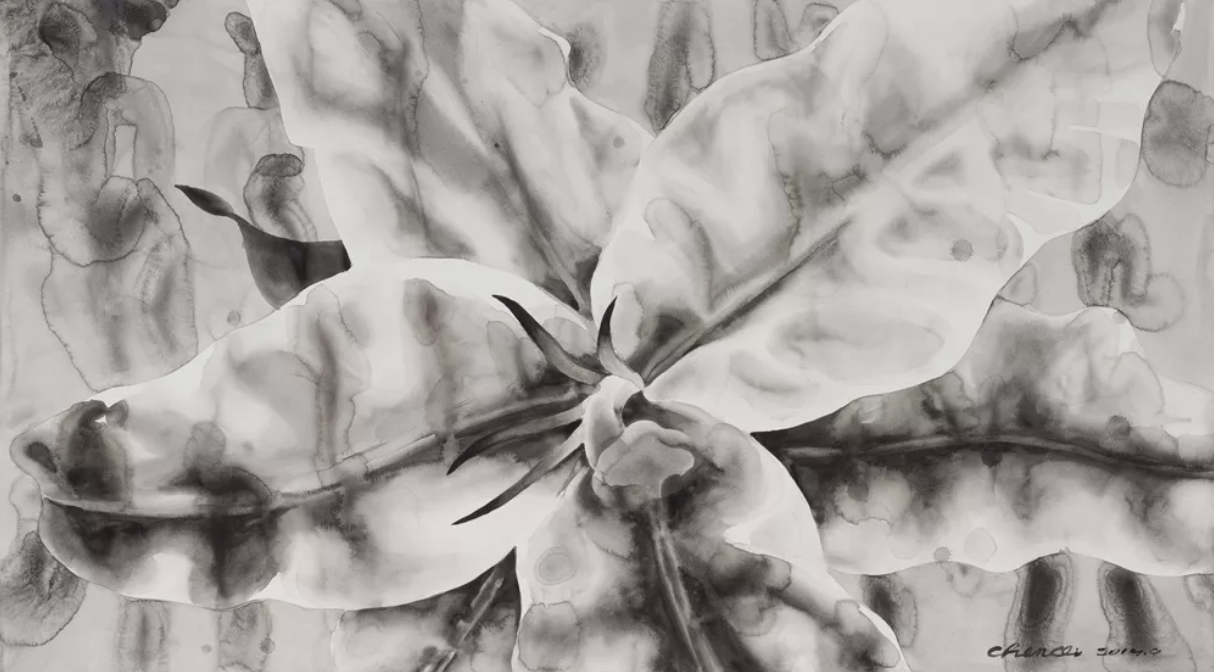 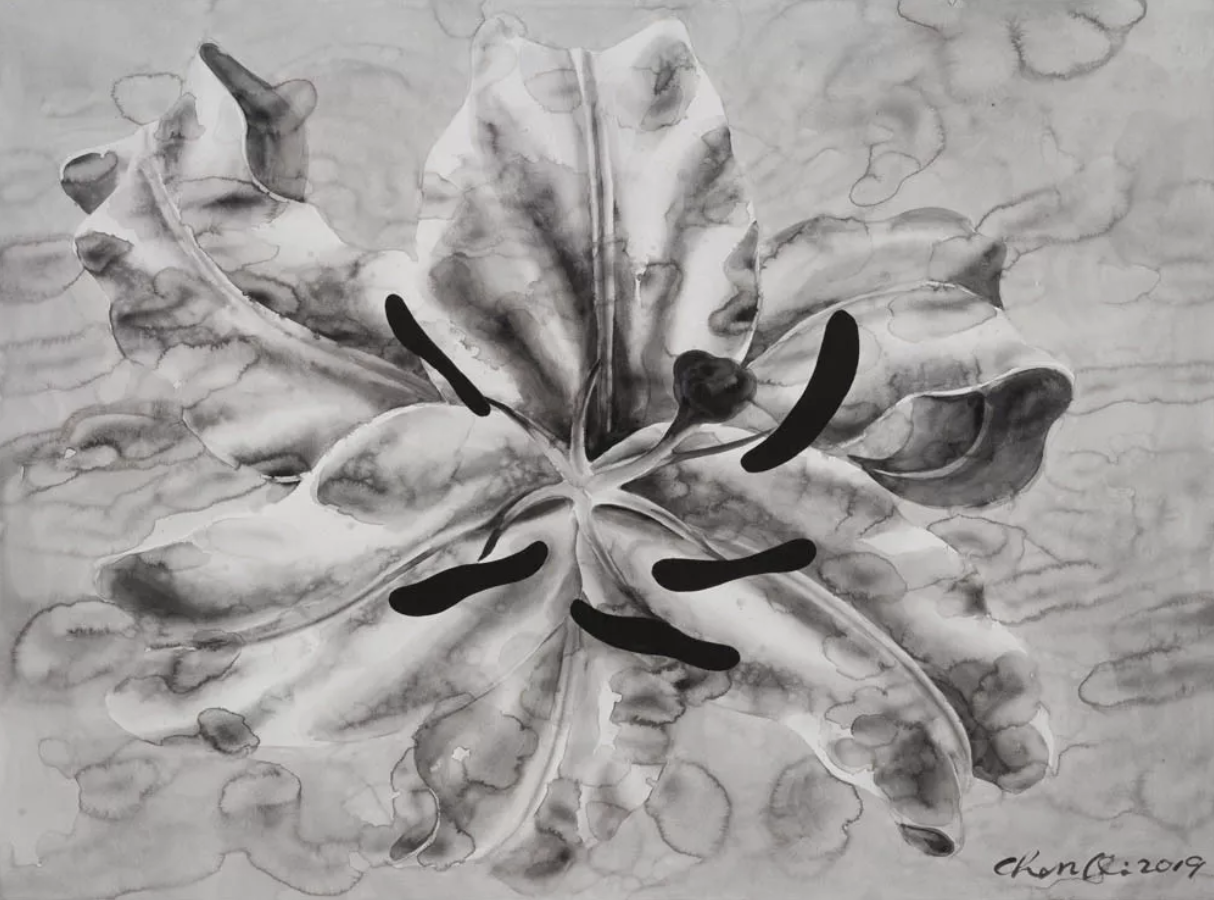 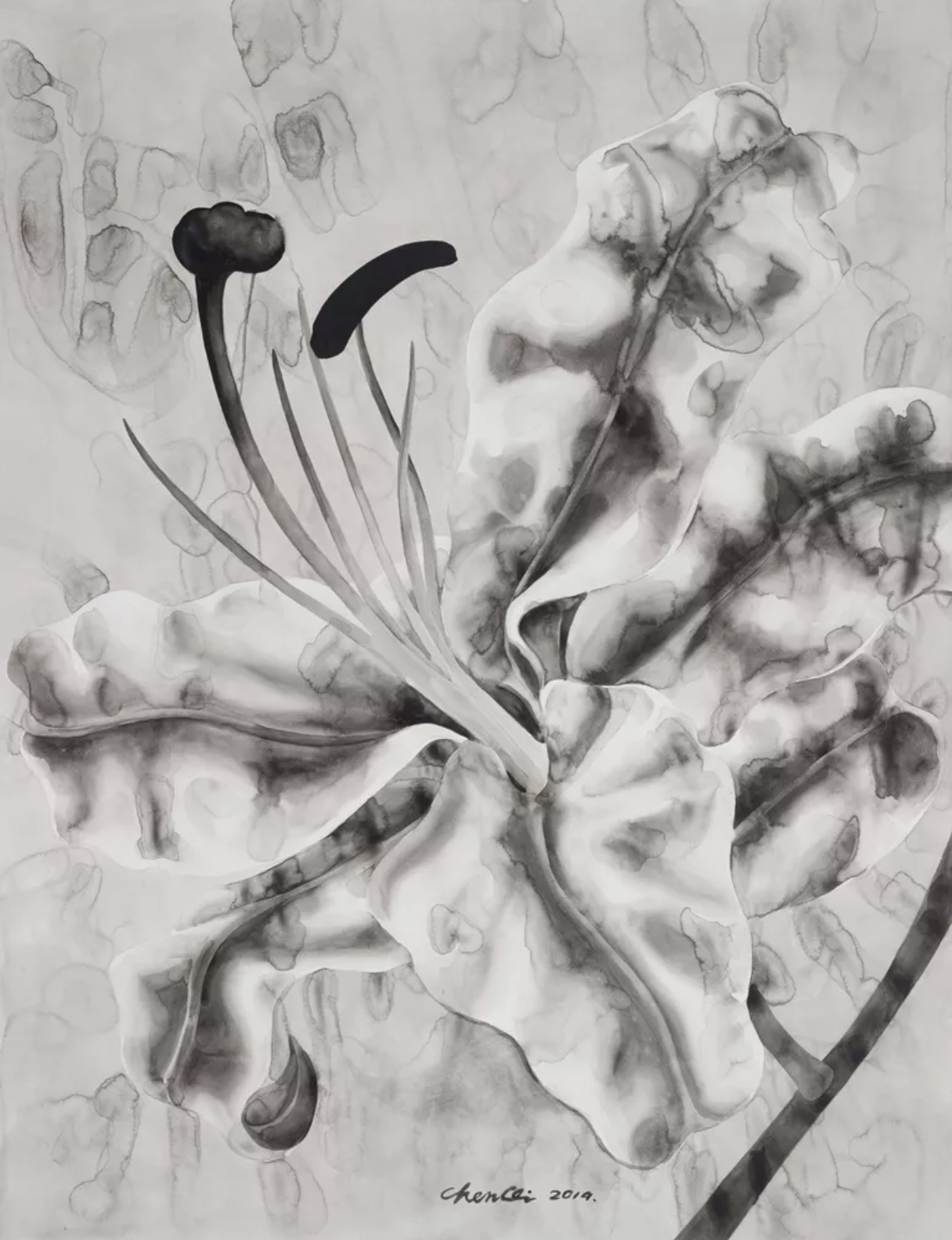 Chen Qi found a new artistic language while creating the lily ink painting series, and he took inspiration from this to create “Banquet”. It is different from the general language of ink and wash paintings; it presents expressiveness in itself. In “Banquet”, the ink colour diffuses from the inside to the outside with the infiltration of water. It is an extension of an ink mark, imitating the posture and rhythm of the blooming flowers. In order to break the singularity of evenly filling the blank area, Chen Qi applied the effect of the collision of ink to mobilise the self-expression of every element in the picture. Thus, it realises and resonates with the artist’s emotion. 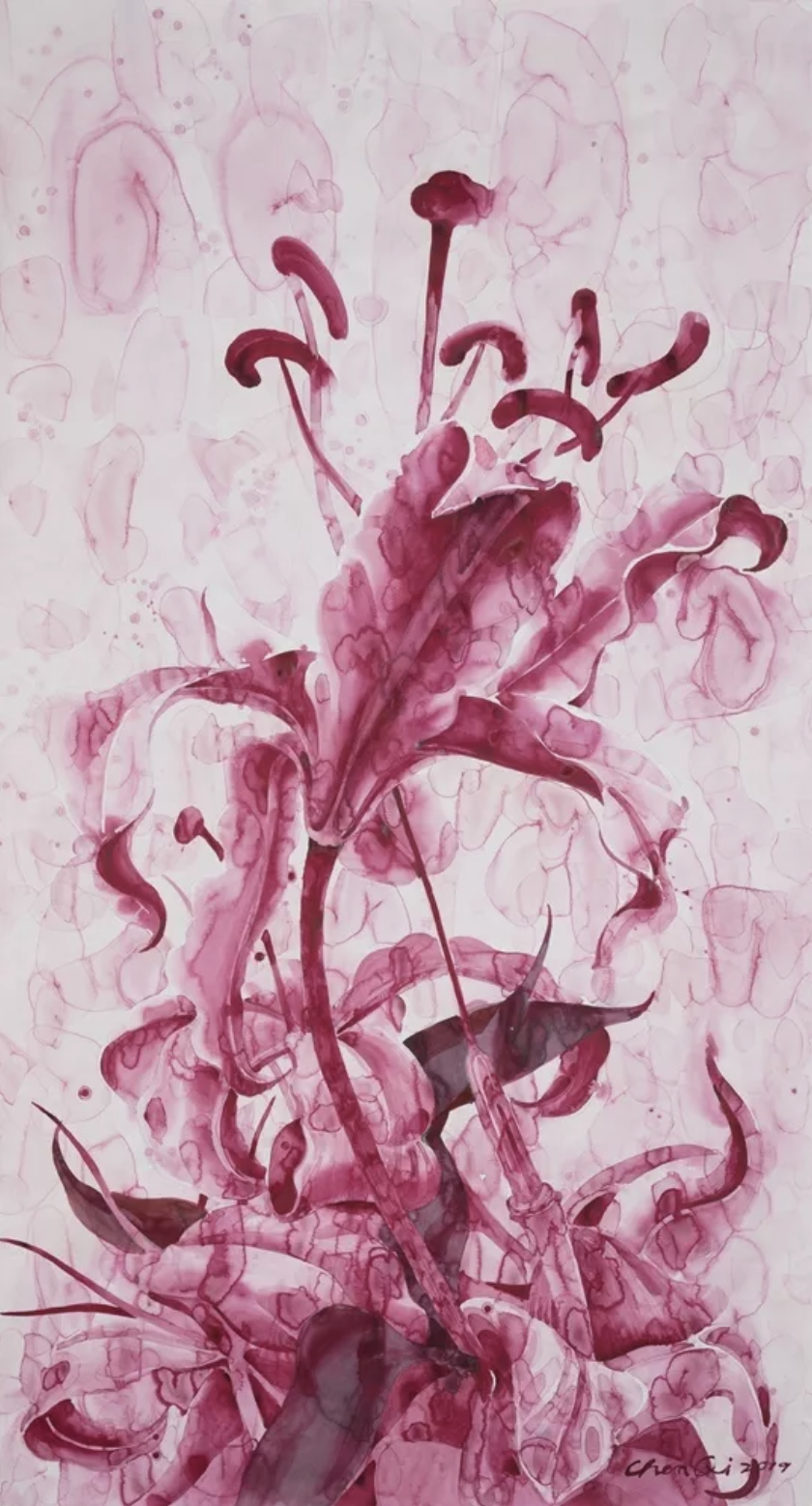 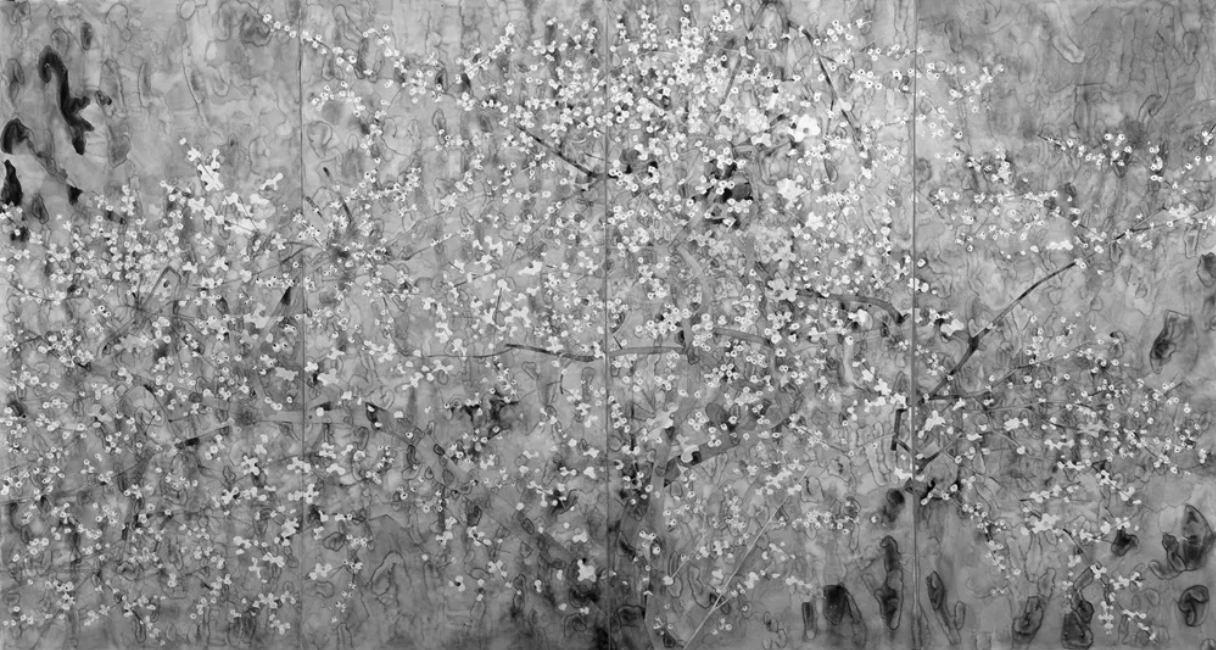 Ink is a brand-new creative medium that Chen Qi has engaged in through the practise of printmaking. However, no matter the way of painting or the expression of artistic language, the ideological framework of printmaking always runs through his experimental attempts. Presenting this new series in the section of “Renewal” demonstrates Chen Qi’s artistic shift from previous works to ink painting experiments, and also symbolises the extension of this artistic context in a broader dimension. But for all kinds of extensions, Chen Qi sets an academic language limitation—a divergence based on the dimension of printmaking. His insistence on the inheritance and revitalisation on prints that may reflect the unlimited possibilities of contemporary printmaking that he has proved with his own practise over many years.

Coexistence: “A place without whence or whither”

The Coexistence unit depicts Chen Qi as an artist who is adept in interpreting space and creating a multi-dimensional spatial experience. From “Notations of Time”, to “Wormhole” and “A place without whence or whither”, the notion of “time” acts as a vital clue in Chen Qi’s artistic context. A series of works in this section retrospect his consideration and transformation of it. In particular, Chen Qi’s grasp of time starts from nuanced feelings, captures the passage of time with keen perception and eventually presents a view in a macro universe. Through combining his nuanced perception with the intervention of spatial dimension, Chen Qi visualises the abstract notion of time. 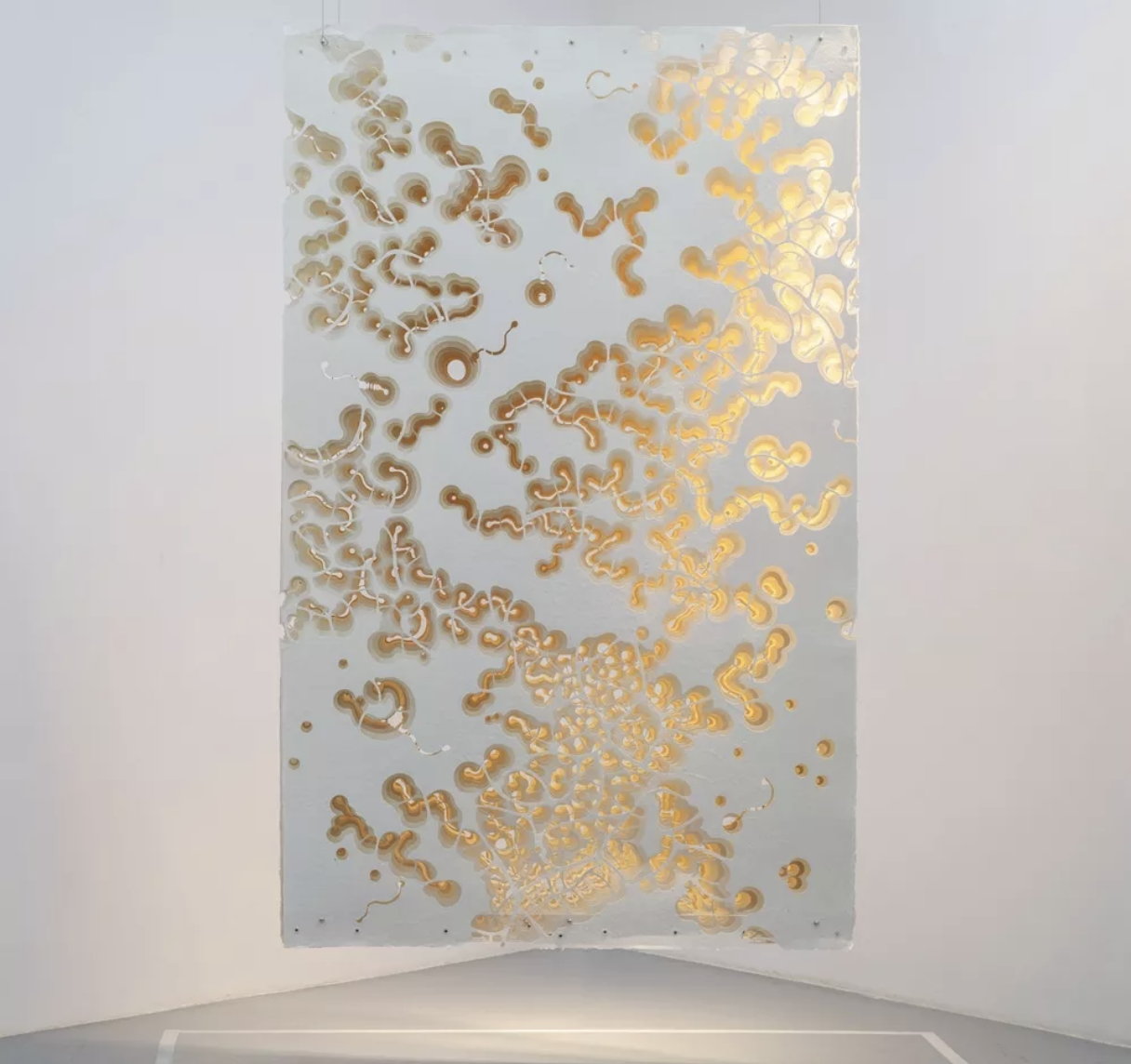 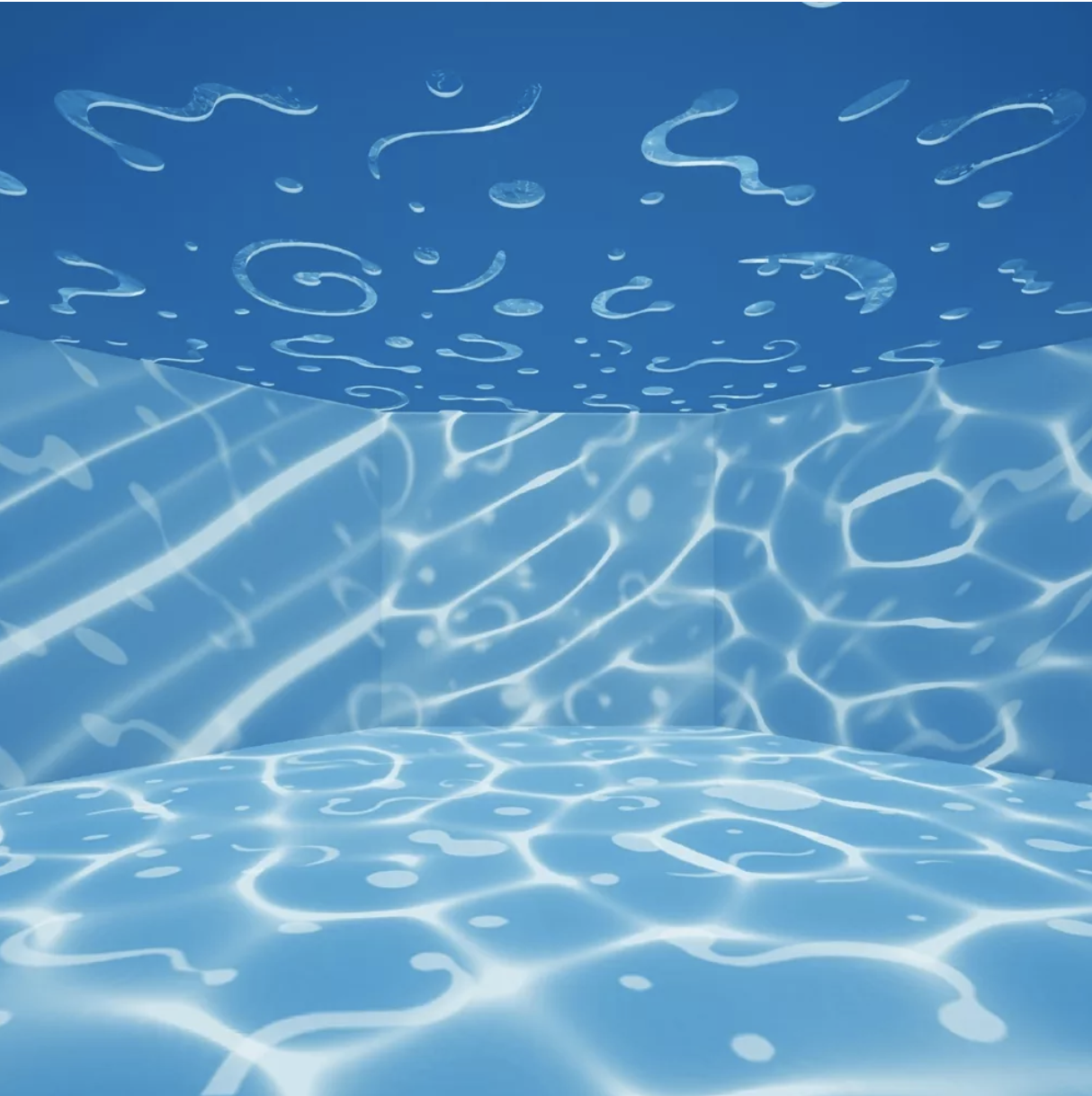 The title “A place without whence or whither” comes from the content of “Diamond Sutra”: “It does not matter if it comes; it does not matter if it goes. This is the spirit of Buddha.” In Chen Qi’s view, it reveals the appearance of life—sometimes what seems to be non-existent actually exists. It is the case with daylight and the package of time implicated in the natural changing of light.

The work “A place without whence or whither” was presented as a public artwork outside the China Pavilion of the 58th Venice Biennale. It was a gift of life and time from Chen Qi to Venice. In order to form a virtual and realistic scene, light is transmitted through the engraved “wormhole”, which symbolises the evolution of time and life. With the change of time, the intensity of light and the thickness of clouds both provide different visual effects in the scene.

In this exhibition, Chen Qi applied new media technology to transform this public artwork into a new indoor interactive installation. He attempts to use the multimedia projection device to simulate natural light in three different scenarios, namely, sunlight, moonlight and light in water. Apart from the imitating of the daylight and moonlight reflecting the direct changing of daytime, he introduces the light in water to realise the fusion of reality and illusion. Also, the reappearance of the element “water” traces back to the ideas derived from “Notations of Time”. 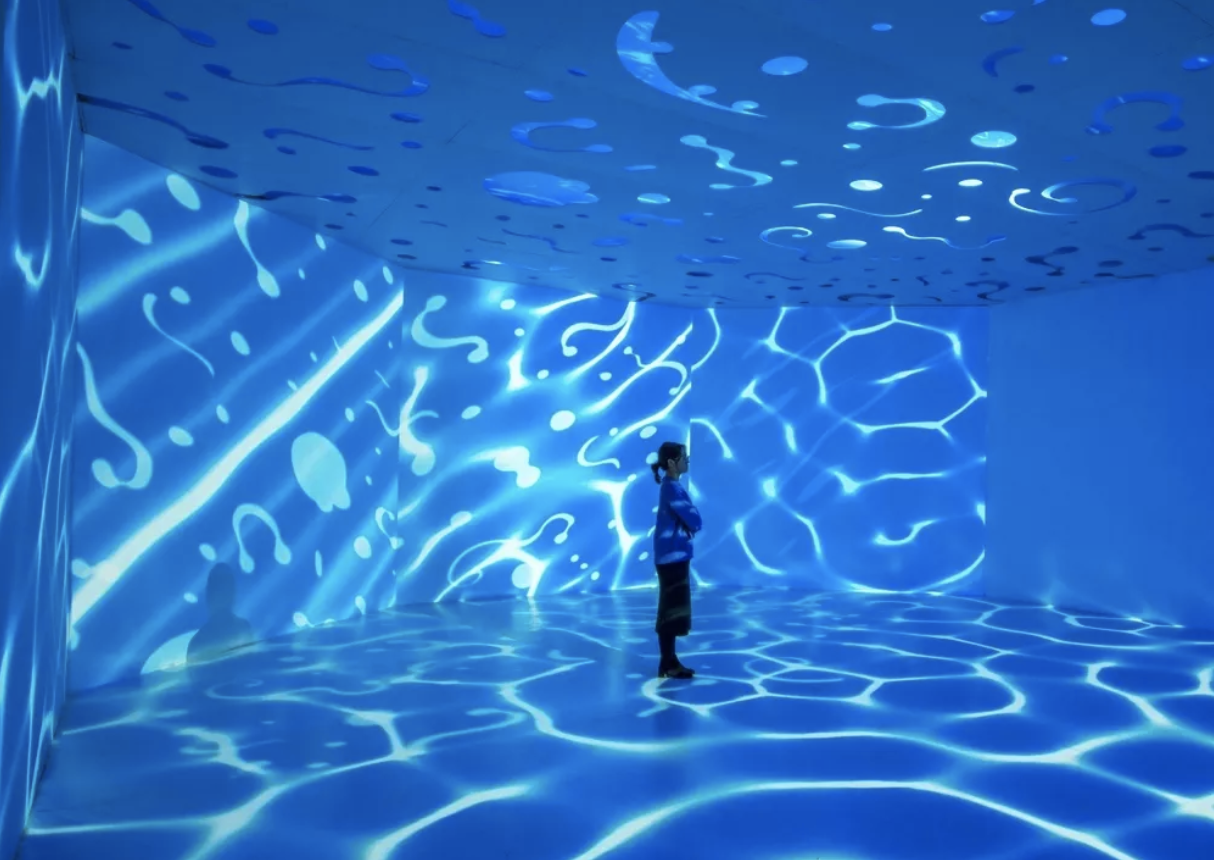 Image: View of “A Place without Whence or Whither” 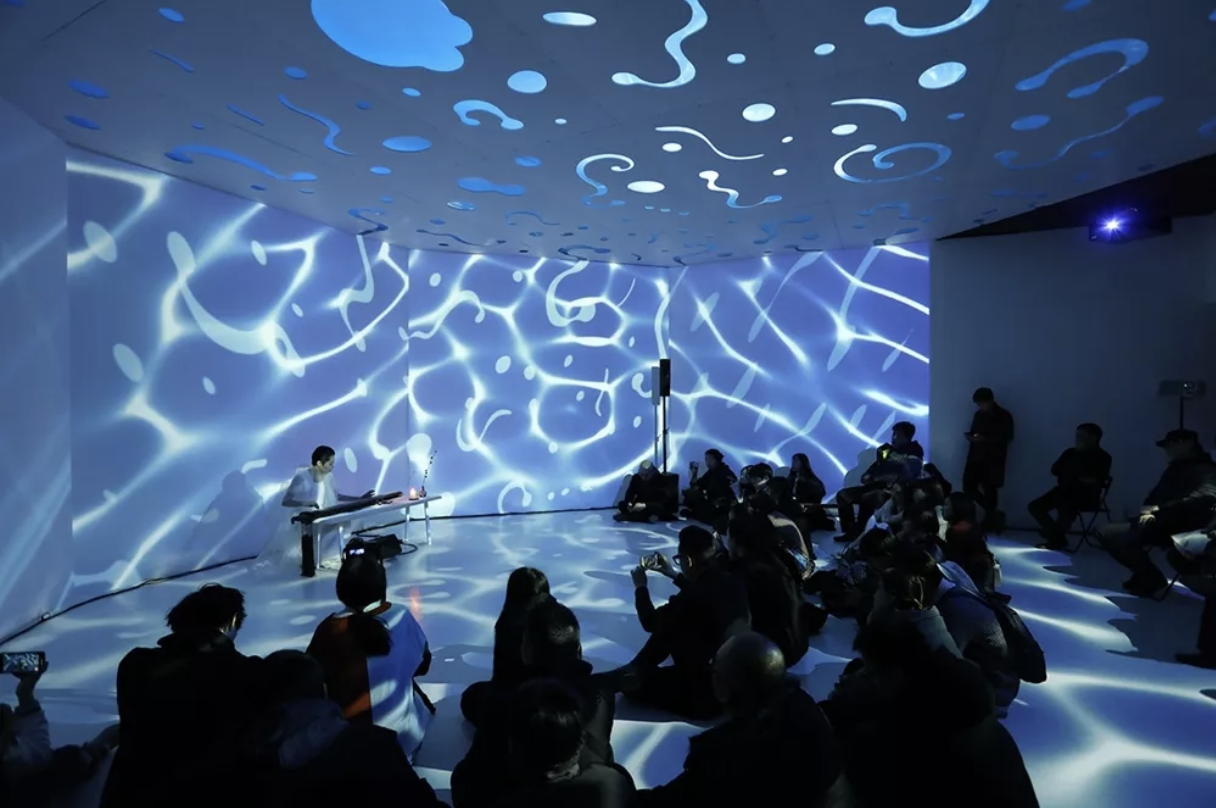 Qiu Zhijie once commented that Chen Qi is an “elegant controller” but a “crazy experimenter”. It is known that printmaking is one of the earliest art categories exposed to technological updates, and it never refuses the involvement of new technologies. Therefore, within the academic framework of printmaking, Chen Qi is practising increasingly diverse art media and languages. For him, it is these experiments that allow the continuous vitality of printmaking.

In the opening ceremony, Wu Hongliang mentioned that he used to use “rationality to the extreme which is super sensible” to evaluate Chen Qi and his art practise. However, from Chen Qi’s new series of works in this exhibition, he thought that such a description was insufficient to conclude Chen Qi. He recognised that Chen Qi could create works in a more relaxed way. He can place the uncontrollable under his control and convey the profound feeling through simple expressions. Chen Qi, as a time traveller, is always experimenting and is always achieving breakthroughs. Thus, it is difficult to depict or comment on his art creations as they have never been fixed and are always updated. 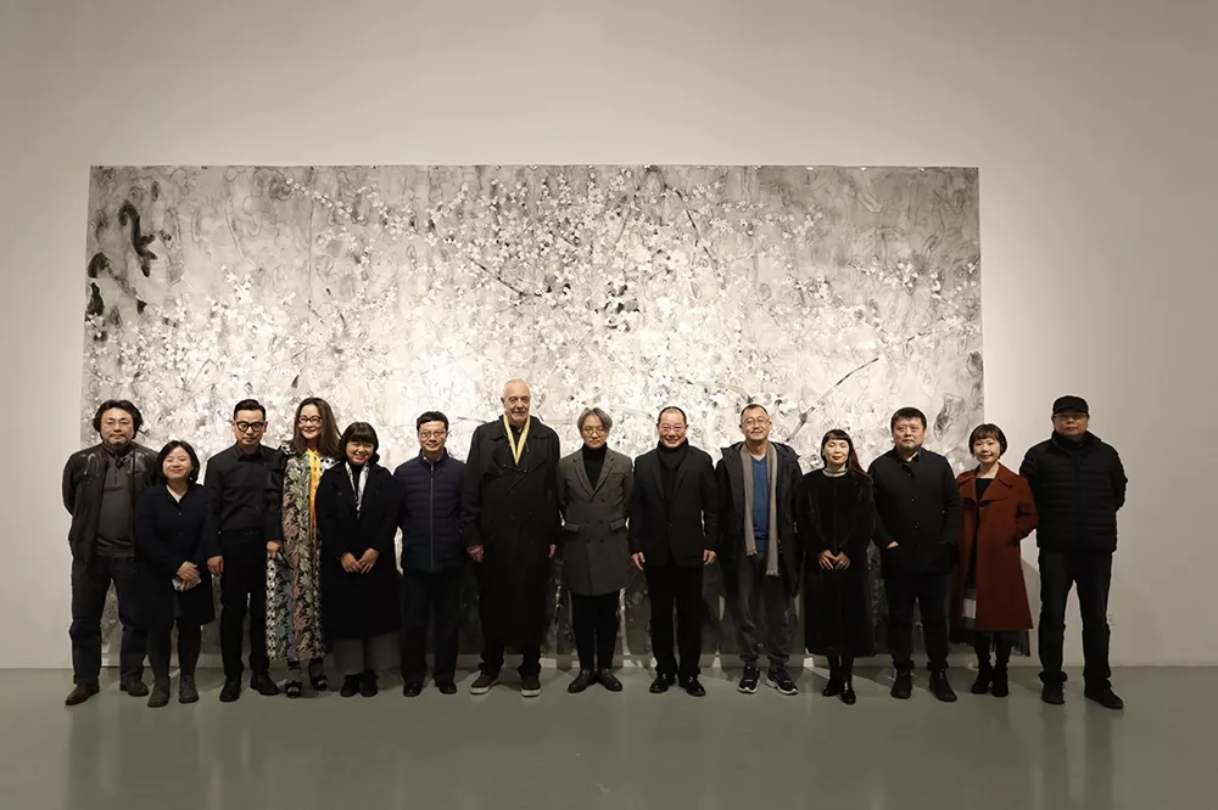 This exhibition starts with Chen Qi’s experiment on the concept of his annual solo show, which is planned to be conducted at the end of every year. Chen Qi regards it as a reflection of himself and a presentation of his thinking and creation during the year. As he said: “This series of annual exhibitions are like layers of rock. The thicker it is, the harder it becomes. Year-end means farewell to the past; it also means welcome to the future.” The exhibition “Renewal and Coexistence” showcases Chen Qi and his artistic practise in the year 2019. What kind of “new vitality” will Chen Qi bring in every subsequent year?