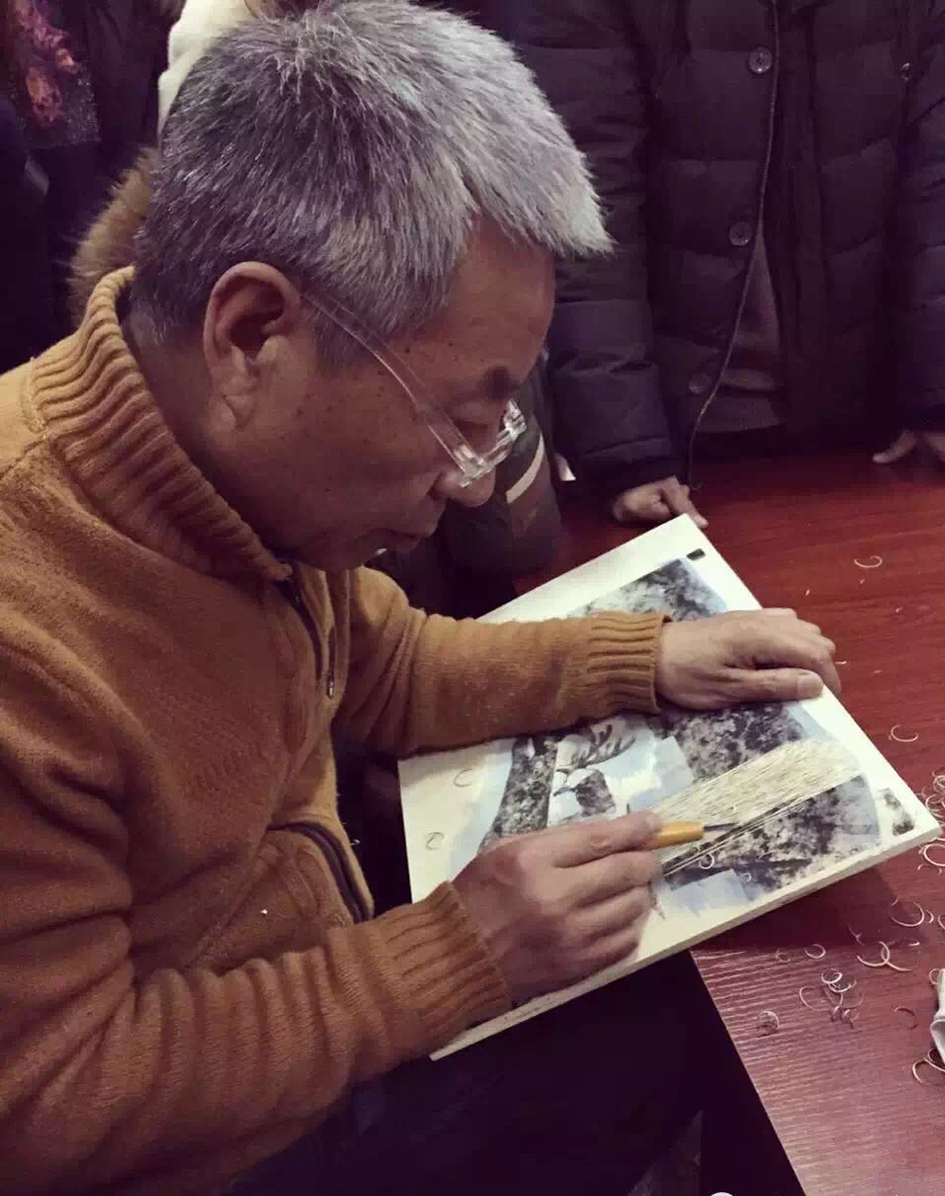 An air of serenity runs through Yu Chengyou’s prints, found in each      delicate stroke and curve. His wonderful woodcuts show his vision of the Chinese landscape and the natural world with effortless grace.Words by Jake Kennedy, article in issue11 of Pressing Matters.

“For decades I’ve spent a lot of time every year sketching and collecting materials – I’ve almost walked through all the mountains, rivers and lakes in HeiLongJiang Provence.” YU CHENGYOU

Pressing Matters first encountered the peaceful serenity of Yu Chengyou’s prints via the ArtChina stand at Woolwich Print Fair in 2019. Their sense of space, contemplation and clear respect of the natural world was evident from every fern, blade of grass or cloud, truly taking the viewer to somewhere more relaxed – certainly more so than the busy print fair! Yu explains that this love of nature began way back in primary school, and with a simple act of mimicry. “I started out trying to imitate popular folk New Year prints,” he recalls. “The themes were always flowers and birds, vegetables and fruits and insects,” he adds. 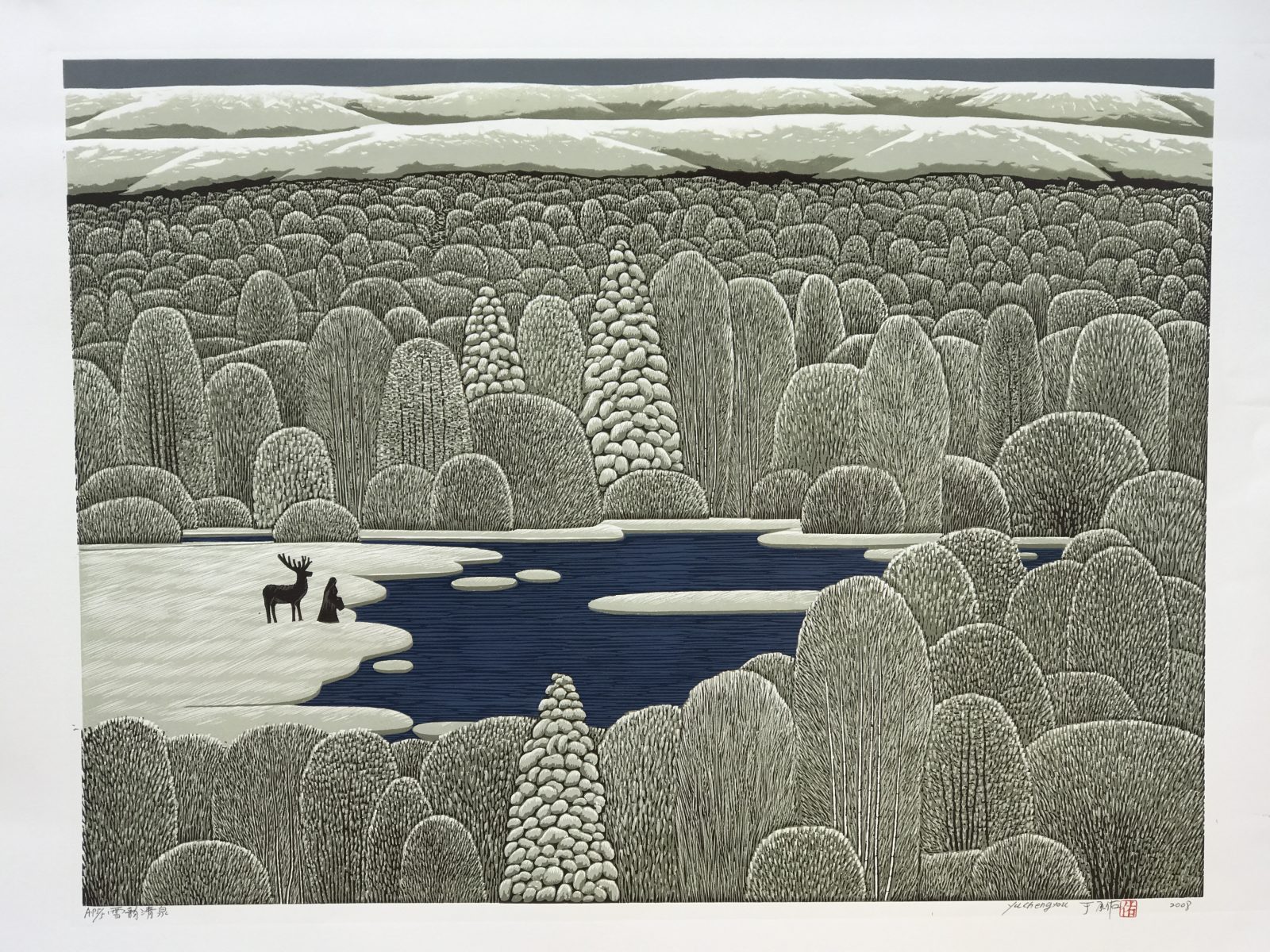 Soon, Yu’s experimentation found him out in the country with his pad. “When I graduated from junior high school in early 1969 – during the cultural revolution – I became an ‘educated urban youth’ – I was 16 at the time – and went to work in the countryside and mountain areas. Together with others from Beijing, Shanghai, Tianjin and other cities who loved art, we drew everyday, but it was mainly portraits, life sketches – but without missing a single day. This practice built the foundation for me in the future… but the inspiration of my early creations mostly came from work and life in Beidahuang – every blade of grass and tree, the local folk and each passing season.” 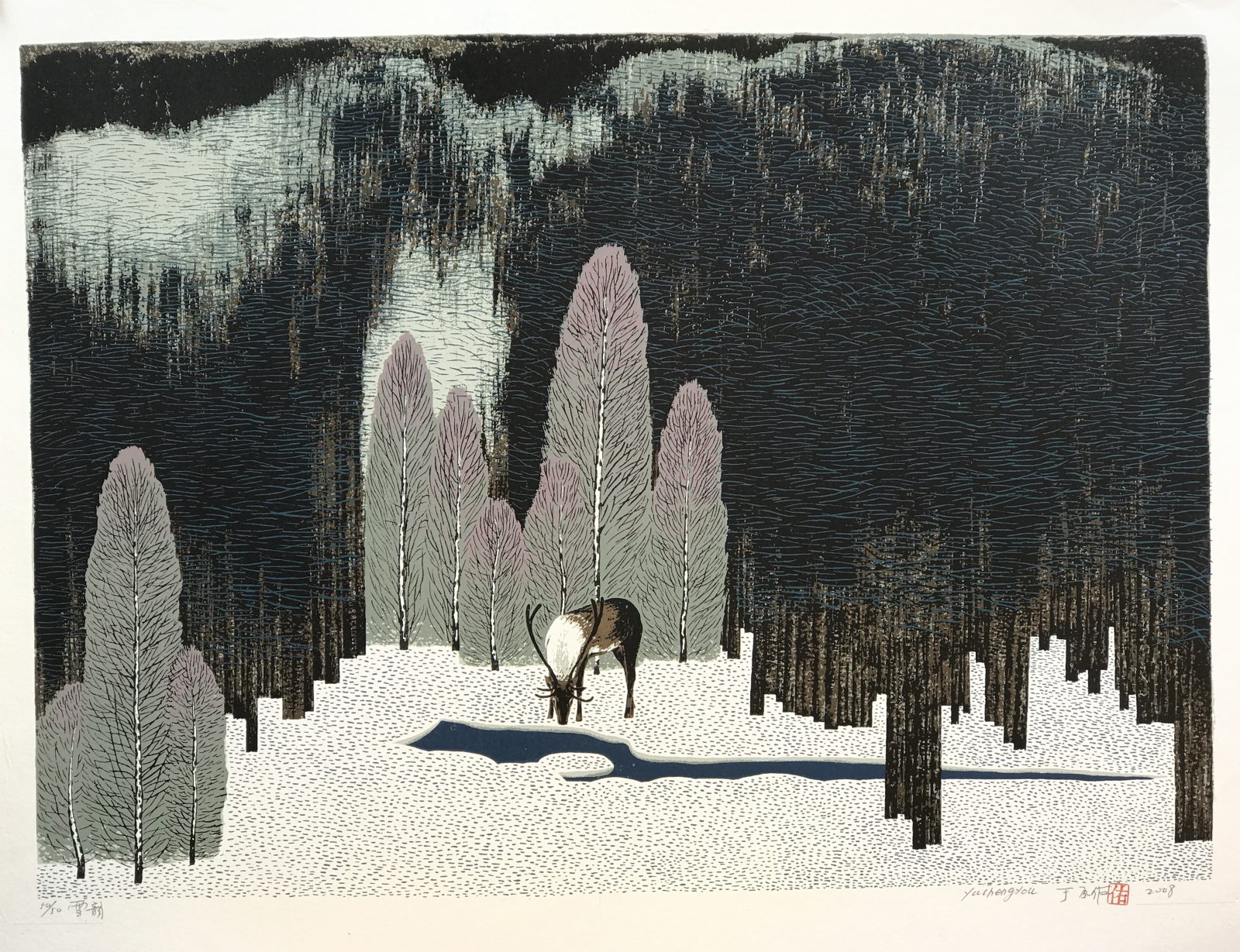 Printmaking soon followed on from the sketching and observation in this artist’s life. “I studied printmaking in the early 1980s. I attended a course taught by Mr. Hao Boyi, one of the founders of Beidahuang printmaking,” Yu recalls. “During six years from 1982 to 1987, I spent about three months every year learning printmaking. Beidahuang has been a most influential creative group in China since it was founded in 1958, incorporating a complete scheme of systematic printmaking research and teaching. Chinese critics call it the ‘real academy of printmaking” and it’s trained many dozens of outstanding Chinese contemporary printmakers. in 1978 I started to apply some of my landscape sketches on plywood and transfer into black and white woodcuts. So essentially my formal printmaking practice began in 1982, after I joined a BeiDaHuang printmaking class.” 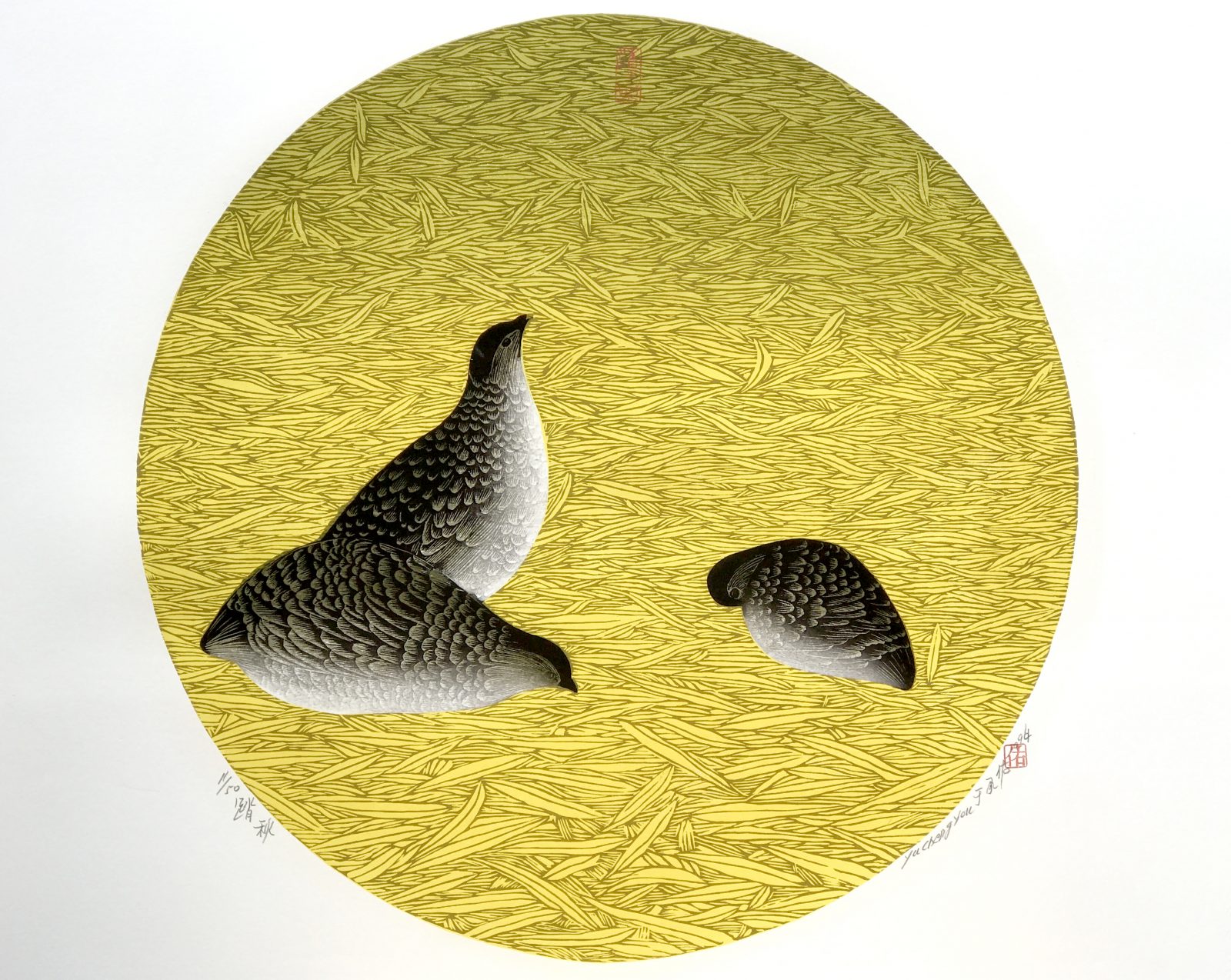 Yu’s technique goes on at length to describe his printing process, forming the backbone of his output, you feel. “First, I have to select images from collected materials – which are mostly my own photos – sometimes using a few, or at other times dozens of them, and I decide how to create a particular print,” he explains. “Then I’ll draw several full size complete pictures to choose the best composition of a print, and this process will take five to seven days. Next, I transfer the drawing to the plywood, which is specially used by the printmakers. Generally speaking I need four to five blocks for a print, and each is cut separately. It takes 10 to 20 days to complete a colour print. I take about three or four attempts to get a good result, and then I’m ready to print.”

“I like to be quiet, and that’s maybe because of my personality.I try to keep my work peaceful.” YU CHENGYOU

Indeed, most of Yu’s prints are really just the result of a lengthy, involved process, with ideas set in place long before he even goes anywhere near the printroom. “For decades I’ve spent a lot of time every year sketching and collecting materials. I’ve almost walked through all the mountains, rivers and lakes in HeiLongJiang Provence, and Heilongjiang covers 473,000 square kilometres! I’ve taken over 200,000 photos. Except for Tibet, Qinghai and Xinjiang, I’ve been to almost all of the other places in China to sketch or paint nature,” he says. “I like to be quiet, and that’s maybe because of my personality. I try to keep my work peaceful. I use simple language and try to express things sincerely, to calmly communicate with the viewer. I think this kind of communication is more equal. To naturally express something is the artistic concept I’ve been pursuing in my works,” he adds. 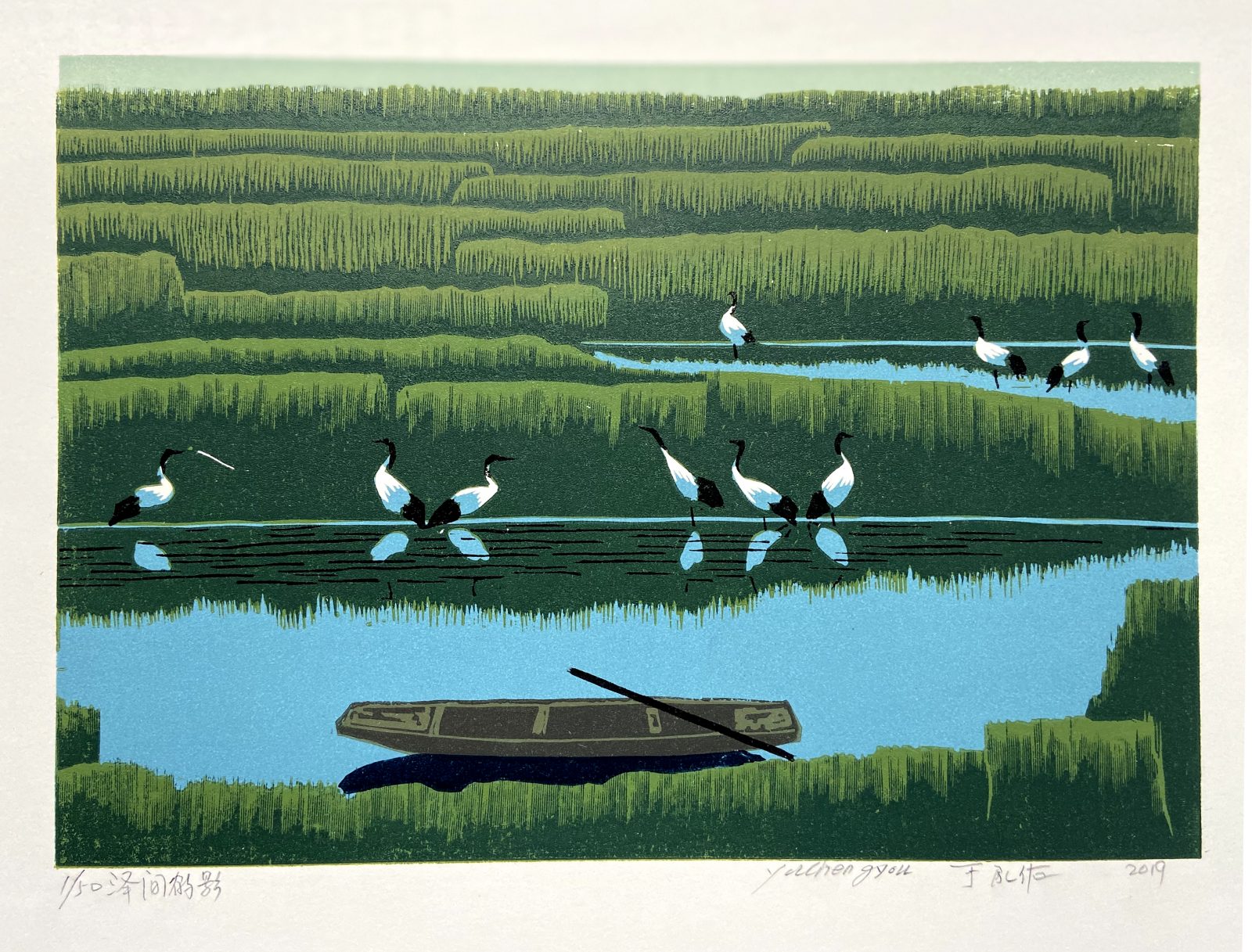 Again, Yu believes it comes down to a harmony in both the work and the nature he is representing. “A human is a part of nature. Humans should live in harmony with animals and plants in nature. I’ve always tried to express this harmony in my work, the feeling I’ve experienced after I’ve traveled to remote areas many times in the north of China – I want to capture this peaceful sensation with wildlife such as the reindeer and others.”

Another charming element of Yu’s prints is an often unusually high horizon line, allowing viewers to place themselves right in amongst the landscape of the pieces. “This allows for many expressive objects to be added into a work, but also
provides a much richer detail and a more completed narrative. The composition is based on the subject matter of the idea. However, for some of my other works I’ve done in recent years, I’ve lowered the horizon,” he says.

Yu’s work has been brought to the wider world by the ArtChina initiative, as mentioned earlier. “I have to thank Ms. Aimin Liu and ArtChina as she’s introduced my work to the UK since 2011, he says. “ArtChina show my works several times through its exhibitions in UK each year. However, in 2018 my biggest solo show, titled Clean Journey – Yu Chengyou’s Print Works, opened at the China print museum in ShenZhen.” Yu also had a touring exhibition that traveled the country in 2019 and will continue this year.

For now though, any remaining time left in 2020 is an opportunity for personal development for Yu, he hopes. “I plan to complete the construction of my personal studio and strive to build a better printmaking studio in China which will include all types of printmaking and the first class presses,” he says. “I’m also planning to create a series of prints to present the four seasons of spring, summer, autumn and winter using oil paints, watercolor and ink as a simultaneous creation, and I plan to print 60 of each edition,” he concludes.

Since 2002, Yu Chengyou has been working as a professional printmaker in Heilongjiang Printmaking Institute and is a member of China Artists’ Association. His print ‘The Night of a Small Village’ won silver medal at the 6th National Print Exhibition.
His prints are widely collected in China and abroad.

Special thanks to Aimin Liu from Art China for her invaluable help with this article.