The Boundary of Desire

The primary object in Chen Long’s new print titled “The Boundary of Desire” is “Bo”, a mythological beast featured in the ancient Chinese book of “The Classic of Mountains and Seas”. It is horse-like with a white body, black tail, a horn, sharp teeth, four-legged and has feet with claws. It sounds like a drum and feeds on wolves, tigers, and leopards. In some versions it is also appears as an imperial soldier.

Chen Long in his studio, Beijing.

Legend tells us that “Bo” was born out of chaos, originally to pull the vehicle for the Western Queen Goddess. Later on, as a spiritual creature, it was sent to the Kunlun Mountains to rescue humans in suffering.

If you meet it during the day, it is a fairy beast, which can take you on a ride and fly with you over the mountains and fields. If you see it in the night, it becomes an evil beast, and wherever it goes people and animals will disappear. It is said that “Bo” can predict the future and if you can master it you will be able to dominate the world. 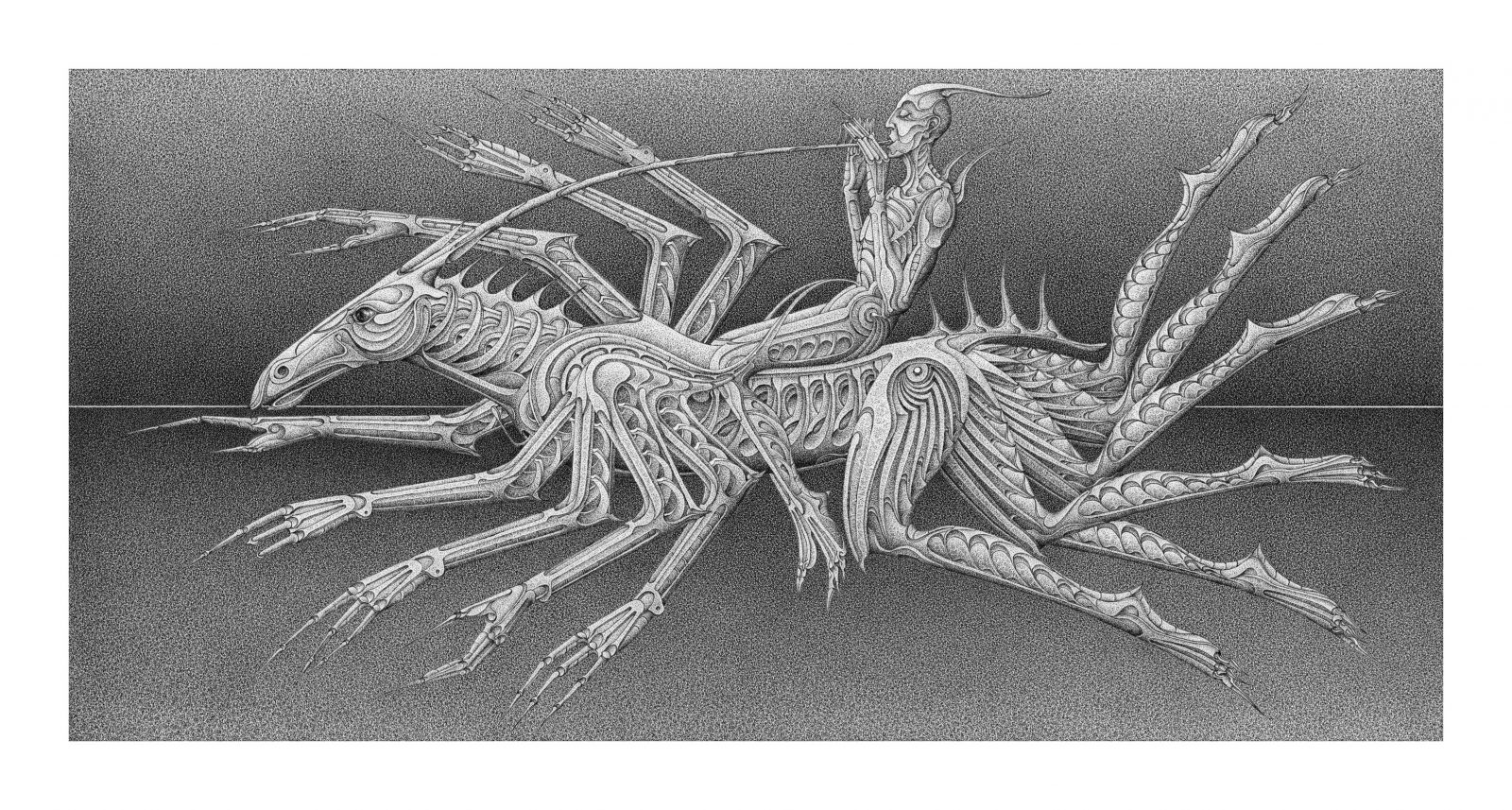 As you can see, unlike the beast in “The Classic of Mountains and Seas” Chen Long’s “Bo” is not four-legged. Rather, through his artistic process, “Bo” becomes a 14-legged beast. Let us call it the “Bo Horse”! It visually conveys the daily hustle and bustle of people and life in today’s material world, where we have so many desires to keep us constantly busy. Just like the person riding the “Bo Horse”, who wishes it has as many legs as possible to help him fulfil all of his desires, good and evil, and who rides like the wind, and sometimes without aim or end, we often just follow the existing path, riding day and night, crazily and aimlessly.

In this print, Cheng Long has strived to achieve the ultimate visual effect by integrating various techniques such as woodcut, side cut intaglio, acrylic embossing, mineral colour, biotite hand-printing, and wood engraving. The rider in this artwork and the “Bo Horse” both have a strong metallic texture, and the background is grainy with obvious metal particles. Looking at it, it almost seems as if you through the surface can hear the clicking sound of the sharp claws of the running horse scratching the ground.

The dual character of good and evil, and night and day, associated with the “Bo Horse” portrayed by Cheng Long metaphorizes the two sides of human desire. The rider communicates with the “Bo Horse” through its sharp horn, from time to time he urges the running horse to go faster and faster. The “Bo Horse” is the rider on the back of himself appearing in another space, and as long as human desires exist, the “Bo Horse” will keep on running and running forever. The greater the desire becomes, the faster it needs to run. The rider’s strive to control the “Bo Horse” metaphorizes that everyone in today’s society has a “master” in his heart that desire to control their destiny, but that people often lose themselves in a rush, and can no longer tell whether they are riding the “Bo Horse” or if they are being ridden by the “Bo Horse”. In the end, who is in control?  Perhaps one day in this constant confusion and entanglement, the “Bo Horse” will gradually slow down, whether it is because the desire grows smaller or because it just gets too tired of running and rushing, and strive to integrate with nature and return to the embrace of the earth. How big is the human desire? Is there a boundary that delimits it? Good and evil, beauty and beast…often in one thought, maybe everyone will give different answers …