ArtChina will exhibit the work of a range of contemporary Chinese artists at London Original Print Fair 3 – 6 May 2018. Amongst the artists featured, perhaps most notable for blending tradition and evolution is Hangzhou artist Wang Chao.

Wang Chao joined the printmaking department of the China Academy of Fine Arts, graduating in 1998. He is an Associate Professor of the Printmaking Department and Director of the Purple Bamboo Studio (Zizhuzhai 紫竹斋) at the China Academy of Art. His prints use techniques established in the late Ming. Wang Chao encourages the studio to research and practice techniques of multi-block colour printing (douban). He won the Fukuoka Art Museum prize in 1998 and has received numerous awards at provincial and national exhibitions. Wang’s work has been collected by leading museums in China, Europe and the USA. 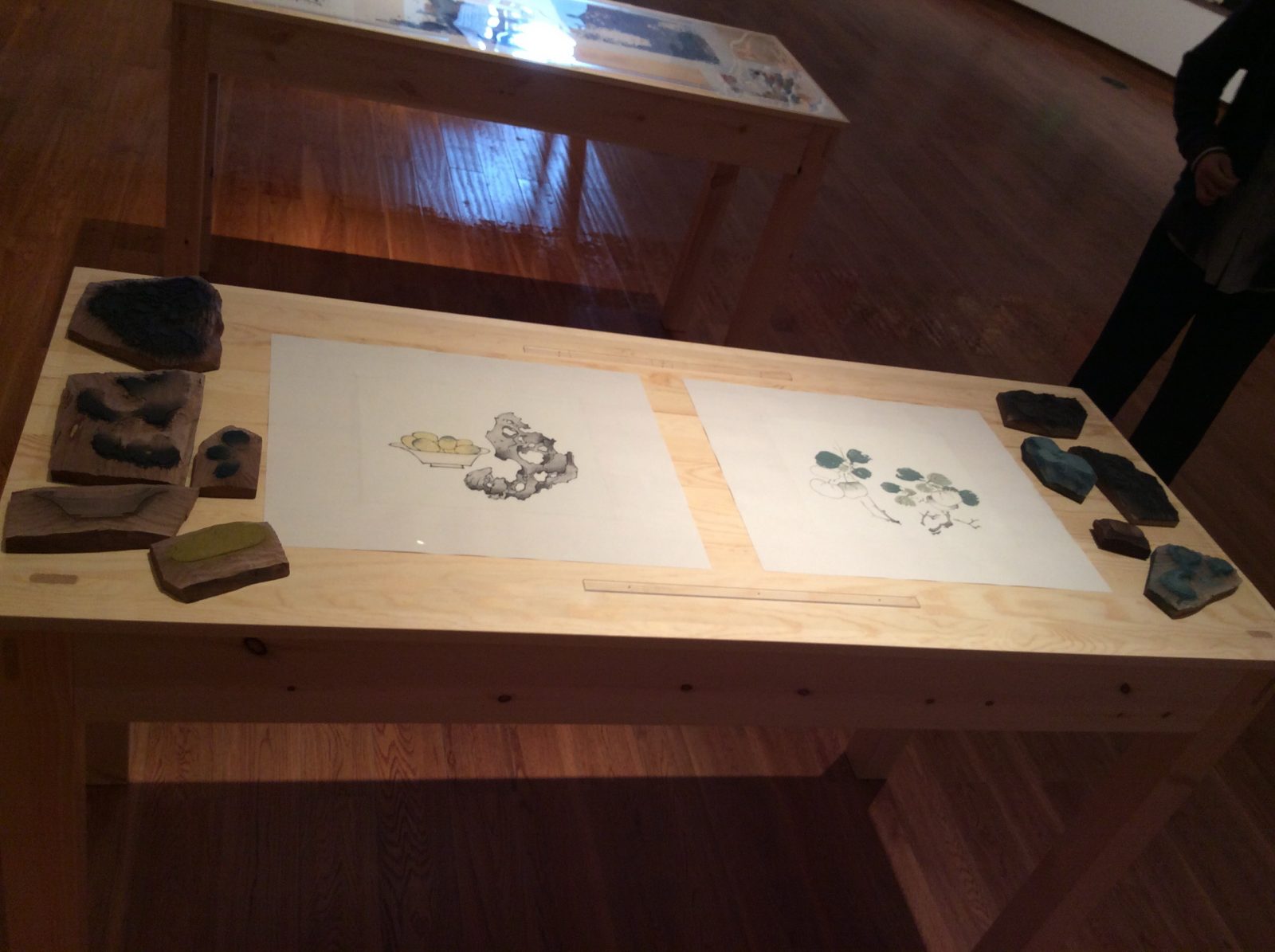 Modern Themes
Whilst inspired by the use of imagery in late Ming artworks, Wang Chao nevertheless expresses layers of meaning in a modern vernacular. The Desk in the Jiuli Studio is a perfect example of this combination: at the front, the woodblock is carved with reversed characters with the title, ‘Contemporary Chinese woodcuts’ (Dangdai Zhongguo muke banhua 當代中国木刻版画). Objects from Wang Chao’s work-table tell of the artist’s deep-rooted love for ancient techniques. But the focus of the print is on the modern and humorous image of the print-maker, engraved on the pear-shaped stone, sleeping rather than studying. In a dream bubble (a late Ming convention), a nightmarish image of broken artefacts is depicted.

Use of a traditional format to highlight contemporary issues
The illustrated book is an important element in Chinese printmaking, and Wang Chao is a modern exponent of the tradition. In Images of heavenly phenomena (Tianhou tuzuan 天候图纂), the format emulates the early seventeenth century work Ten Bamboo Studio Manual of Calligraphy and Painting (Shizhuzhai shuhua pu 十竹斋書画谱). Wang Chao illustrates a series of meteorological events around a wash-stand. (In Chinese folklore, patterns on the enamel of a wash-stand are used to predict the weather). A sequence of nine illustrations ends with the destruction of the wash- stand. The series is a commentary on man’s rapacious exploitation of natural resources, and the destructive world climate-change that results.

Images of Heavenly Phenomena: Concertina Album 2000
“Wang Chao is a pre-eminent exponent of blending contemporary themes with ancient technique.” says Aimin Liu, Director of ArtChina. She continues, “We are very happy to have a range of his masterful and thought-provoking artworks on display at this year’s London Original Print Fair.”